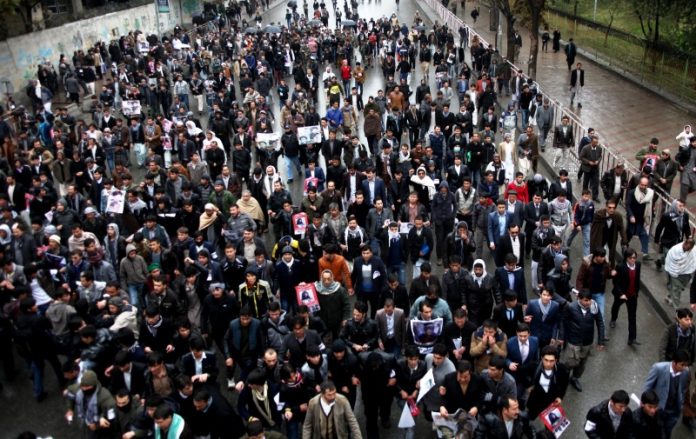 Thousands of supporters of presidential hopeful Abdullah Abdullah marched on the Kabul streets on Friday to protest alleged poll fraud committed to favour incumbent President Ashraf Ghani amid a delay in declaring preliminary results of the election held two months ago.

The protesters shouted slogans against Ghani and the country’s election commission, alleging that the poll body was counting hundreds of thousands of invalid votes polled on Sep.28 to help the president win a second term, Efe news reported.

The rallies began around 8 a.m. (local time) from various parts of the Afghan capital and the marchers were headed towards the center of the city, Murtaza Eshraqi, a spokesperson for Abdullah’s electoral team, told EFE.

“We demand that the election commission should act as per the law, and should stop its illegal decisions. Our main objection is against the counting of 300,000 fraudulent votes that should be invalidated,” Eshraqi said.

The result of the September 28 vote was to be declared on October 19 but had to be postponed until November 14 due to technical problems.

The second deadline was also pushed back after Abdullah, one of the key candidates, protested the alleged fraudulent addition of votes to a planned recount by the Independent Election Commission.

According to the poll panel, out of 2.7 million votes polled, only 1.92 million were biometrically verified. Of these verified votes, 86,000 more were annulled because the ballots did not meet the required criterion set by the commission.

But Abdullah, who currently shares power with Ghani in a unity government, alleged that 300,000 biometrically verified votes were effectively invalid and should not be recounted.

Abdullah’s supporters have boycotted the auditing and recounting process as protesters blocked election officials in at least seven of the 34 provinces from completing the process that would decide who among the contenders had won a majority in the first round or whether the voting needed to go to a runoff.

“We want transparency, we don’t want fraud in the election. We will stand till the end against fraud, we don’t want to have a president to come to the palace through fraud,” Azim Ahmadi, 24, one of Abdullah’s supporters told EFE.

Ahmadi was among a group of hundreds of protesters in the north of Kabul marching toward the city center.

The government had deployed thousands of personnel of security forces in the city to thwart any attempt at triggering violence.

Security forces, mostly in armored vehicles, had blocked some roads leading towards the Presidential Palace as most of the shops and businesses in Kabul were closed.

Kabul Garrison, a combined command of police, army and Afghanistan’s main spy agency, which is responsible for the security of the capital in a statement asked the protesters to act within the law and not to carry arms.

“Protesters should not inflict damage on private and public properties and institutions, and protesters should respect the dignity and rights of the citizens,” the statement said.

Abdullah’s team had held similar protests in 2014 after presidential elections marred by fraud allegations ended in a tense impasse between Ghani and Abdullah before they decided to form a power-sharing government under a deal brokered by the United States.

But over the years, Abdullah has lost the support of some of his key allies.

“We don’t support the man (Abdullah) anymore,” Atta Muhammad Noor, head of the Jamiat-e-Islami, said in a video posted on his social media channels.

Abdullah is also a senior member of the political outfit that was among other mujahideen groups at the forefront of the war against the Soviets.