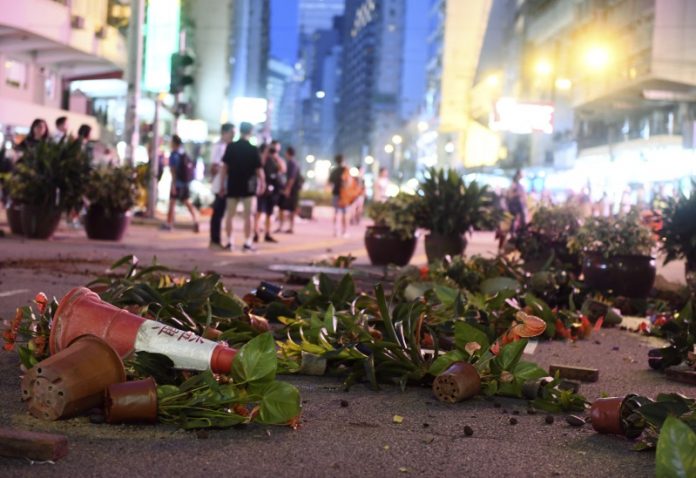 Hong Kong pro-democracy activists have returned to the streets, a week after it swept the local elections, according to media reports.

After two relatively quieter weeks, the protesters were out in force again for three authorised marches in different parts of the city on Sunday, each bigger than the one before, Efe news reported.

They hurled smoke bombs and bricks during a protest on the afternoon, reports Xinhua. The city-state has been witnessing social unrest for almost six months.

According to the Hong Kong Police, around 5 p.m. (local time) hundreds of rioters gathered near Empire Center in Tsim Sha Tsui. Some of them hurled smoke bombs, stirring up public fear and causing chaos.

At 3 p.m. (local time), thousands thronged Tsim Sha Tsui in Kowloon for a march organised under the theme “Never forget why you started,” designed to reiterate protesters’ five demands in the ongoing anti-government movement, including an independent body to probe alleged police brutality and introduction of universal suffrage.

Raising slogans, like “Hongkongers, revenge!” and “Five demands, not one less,” the demonstrators marched peacefully to the adjacent district of Hung Hom, where violent clashes with police had taken place a fortnight ago, resulting in a 13-day siege of the nearby Polytechnic University that ended on Friday.

Earlier in the morning, a march took place under the theme “Children don’t want tear gas.” Hundreds of participants, many of them children holding fluffy animal toys, gathered in a harbourside square in the core business district to demonstrate against the use of tear gas on protests.

“The movement is not going to end anytime soon. There are lots of issues the government has yet to deal with. I’m worried about the long-term effects of tear gas on my children,” a young mother of two, who identified herself as Ho, told Efe in between raising slogans, like “Children don’t need tear gas but poison-free playgrounds.”

“I told my children not to touch any object in places where tear gas had been fired. Some of my friends have delayed pregnancy plans as they don’t know what harm the tear gas may have on babies,” she said.

The protesters’ cry for freedom continued shortly after midday when around 1,000 people gathered at a garden for a march under the theme of “Thanking the US” for passing the Hong Kong Human Rights and Democracy Act.

American flags were waved and the “Star Spangled Banner” was played before the crowd set off to the US Consulate General. Some protesters also moved on to the Tsim Sha Tsui march.

The pro-democracy camp won close to 400 of the 452 seats in the local body polls. Three days later, US President Donald Trump signed the Hong Kong Human Rights and Democracy Act.

Violence erupted again in Hong Kong over the weekend after a week-long calm. A man was attacked when he was trying to remove roadblocks set up by protesters early Sunday. He sustained serious head injuries. 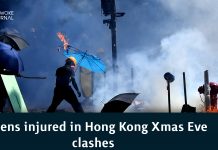 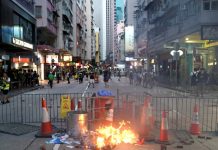 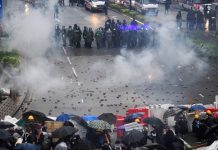