Kerala Minister G. Sudhakaran has said it not fair to blame the state government solely on the issues related to the condition of roads, a day after the Kerala High Court came down heavily on the matter.

A 23-year old youth on Thursday was run over by a truck when his bike hit an iron barricade, which warned people of a hole in the main road at Kochi.

Sudhakaran while speaking at a function said that it was not fair to generalize things.

“It’s not fair to blame the Finance Minister and PWD Minister. Generalizing things won’t be good. In this issue, the Kerala Water Authority is solely responsible and the action should be taken against it. Criticism should be leveled against the wrongdoers,” said Sudhakaran.

“Look into the huge pendency of the cases in the courts in Kerala. It’s because there is a shortage of judges and facilities. Does it mean, that they (judges) are not doing their jobs? Our government has the highest regard for the judiciary and during our tenure, we have spent Rs 700 crore for the judiciary in building infrastructure,” he added.

On Friday, Justice Devan Ramachandran of the Kerala High Court apologized to the family members of the victim.

The angry judge asked the advocate general, “how many more should die before the concerned authorities act?”

The judge then said that it is a shame that no action has been taken despite the intervention of the court on this issue, saying if this continues, then the concerned authorities will be personally liable and even seven generations’ incomes won’t be enough as compensation.

The court-appointed three-member amicus curiae and asked them to submit a report on the condition of roads in Kochi by December 20. 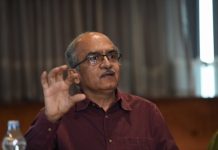 Bhushan’s submission on hearing on sentence by another bench denied

Central Board of Secondary Education Suspends Official for lax Supervision