All-rounder Ben Stokes, who played a crucial role in England’s maiden win in ICC Men’s Cricket World Cup earlier this year, has been named BBC Sports Personality of the Year. Stokes became the first cricketer since Andrew Flintoff in 2005 to win the prize.

On an unforgettable day at Lord’s on July 14, England won their first-ever men’s World Cup as they initially leveled the scores to tie with New Zealand at the end of the 50 overs before going on to tie the Super Over as well — winning the tournament by striking a higher number of boundaries during their innings. The all-rounder was named the man of the match in one of the most dramatic matches in the history of the game.

Stokes was presented with his award by Princess Royal and former Manchester United and Scotland footballer Denis Law.

“It’s an individual award but it’s a team sport,” said Stokes on receiving the award. “The best thing is you get to share big moments with teammates and back-room staff. They make moments like this summer possible. Two years ago was a tough time for me in my life and I had so many people help me through that. I wouldn’t be up here without you, so thanks.”

In a public vote, Formula One driver Lewis Hamilton finished second while sprinter Dina Asher-Smith was third. The other shortlisted athletes were the footballer Raheem Sterling, the Wales rugby captain, Alun Wyn Jones, and the world champion heptathlete, Katarina Johnson-Thompson.

At the awards ceremony, which took place on Sunday evening in Aberdeen, the World Cup-winning squad was crowned Team of the Year while Jos Buttler’s run out of Martin Guptill in the final was voted the Greatest Sporting Moment of the Year. 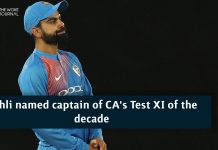 Kohli named captain of CA’s Test XI of the decade 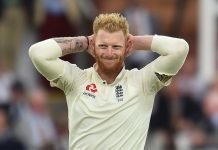 Ben Stokes is PCA’s Player of the Year