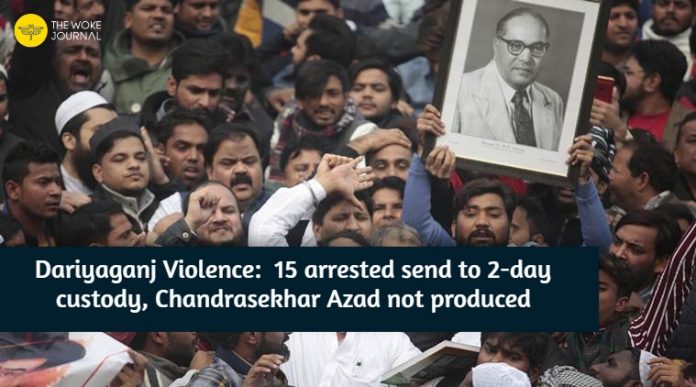 15 people who were arrested by Delhi police in connection with the protest march in Dariyaganj was taken to custody for two days. The police had asked for a 14-day custody of the accused. The court will hear their bail applications on Monday.

Bhim Army’s Chandrasekhar Azad who was detained yesterday amid huge protest at Jama Masjid was arrested by today afternoon in connection with the violence, however, he was not produced at court today.

Advocate Rebecca John who represented the accused said that the charges were bailable.

“Section 436 can be invoked for a crime where an explosive substance is used to set a house or other property on fire. Here, a car parked on the road was set on fire. A plain reading of Section 436 shows that it cannot be invoked in this case. Nevertheless, none of the accused produced here had any role to play in this,” Ms John said the court.

During the arguments, the lawyer said, “Even assuming that any of these men had anything to do with the incident, the allegation is that a car parked on the side of the road was set on fire. They have invoked sections relating to assault on public servants. That is punishable by a maximum of 3 years. Section 3&4 of public property act contains provisions of up to 5 years imprisonment. Public property is a property owned by the government. How is this Act being invoked? What building was damaged?”

She also alleged that the police is deliberately interfering with the people’s right to dissent.  “Also, as none of the 15 men here knows each other, how can criminal conspiracy be evoked against them?” she asked.

Azad’s advocate meanwhile expressed concern about the fact that he was not produced.

“We don’t even know whether he is alive or not. As the investigation officer is here, he should answer why he alone has not been produced,” he said.

Meanwhile, police informed that Azad who had been arrested with accusations of inciting the mob is currently being questioned and will be produced in court within 24 hours.