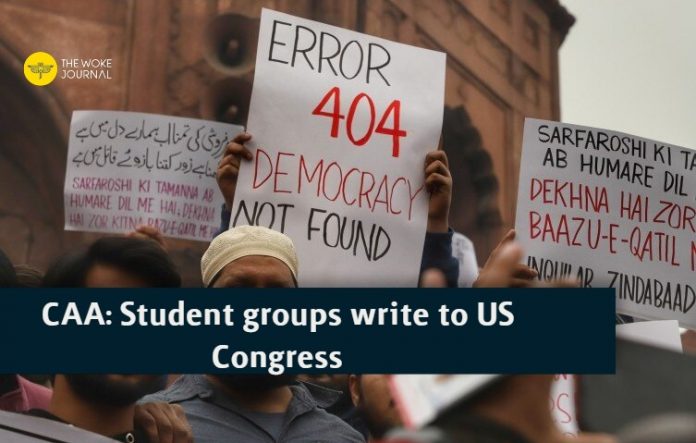 Expressing solidarity with the ongoing protests against CAA in India, students organisations in the United States wrote a letter to the US Congress on Saturday. The organisations referred to the act as “illegal and unconstitutional” as it explicitly display religious discrimination. The letter asked for sanctions against officials of the Narendra Modi-led government.

“On December 11th, the world’s largest democracy passed the Citizenship Amendment Act, an illegal and unconstitutional law aimed at excluding Muslims from Indian citizenship. By dividing Indians into Muslims and non-Muslims, the bill explicitly enshrines religious discrimination into law,” read the letter.

“Hindutva aims to erase India’s diverse myriad of cultures and faiths, redefining the country into a Hindu civilization and promoting violent and exclusionary attitudes toward Muslims,” wrote the signatories.

They also said that BJP in India had been following a “hardline and revisionist brand of Hindu nationalism.” They also referred to RSS as a “Hindu extremist group that drew inspiration from fascism.”

“The Citizenship Amendment Bill is just the latest of India’s many steps to marginalize its population of 200 million Muslims,” the organisations said. The letter also pointed out the communications blackout in Kashmir, increase in the mob lynchings against Muslims, police brutality against protesters and the NRC protests in Assam.

“Those who are not listed on the registry can be put in mass detention camps and made stateless persons,” the signatories alleged.

Pradhan Dines at Dalit’s Home in Sambalpur in Odisha