Pope Francis celebrated the traditional Christmas Mass at the Vatican’s St. Peter’s Basilica church, and in his sermon spoke of how God loves everyone, even the worst of mankind.

During the Mass on Christmas Eve, when Catholics commemorate the birth of the Lord Jesus, Francis on Tuesday said of his coming: “We realize that, when we failed to measure up, God became small for our sake; while we were going about our own business, he came into our midst.”

The Mass, which for a number of years has been held at 9:30 p.m. Italian time (2030 GMT) and not as a Midnight Mass, began with the announcement of the birth of Jesus with the reading of an ancient text of the “Kalenda”, the Christmas proclamation of his coming, Efe news reported.

Afterward, Pope Francis, 83, removed the veil from the image of the Baby Jesus placed on a throne before the altar and kissed it, while bells rang to announce the birth of Christ.

To some 10,000 people gathered in the Vatican Basilica, the pope in his sermon reflected on the significance of the coming of Jesus, who, he said, brought “divine love, the love that changes lives, renews history, liberates from evil, fills hearts with peace and joy”.

Jesus came freely as a little child “so that we might love him,” Francis said on the seventh Christmas Eve of his pontificate.

“His love is non-negotiable: we did nothing to deserve it and we will never be able to repay it,” he said, adding that “Christmas reminds us that God continues to love us all, even the worst of us”.

“God does not love you because you think and act the right way. He loves you, plain and simple,” he said. “You may have made a complete mess of things, but the Lord continues to love you.”

“May we not wait for our neighbors to be good before we do good to them, for the Church to be perfect before we love her, for others to respect us before we serve them. Let us begin with ourselves,” Pope Francis continued.

“Let us receive the gift that is Jesus, in order then to become a gift like Jesus. To become a gift is to give meaning to life. And it is the best way to change the world,” he said.

“We change, the Church changes, history changes, once we stop trying to change others but try to change ourselves and to make of our life a gift.”

“And just as God called the shepherds, so too he calls us, for he loves us,” he said. “For better or worse, in sickness and in health, whether happy or sad, in his eyes we are beautiful, not for what we do but for what we are.”

After the Mass, Pope Francis carried the statue of the Baby Jesus in a procession to the manger in the Vatican Basilica, accompanied by 12 children from various countries around the world. 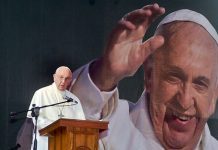 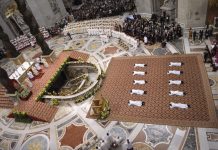 Mood for Inter-Korean Summit not yet Right: South Korean President