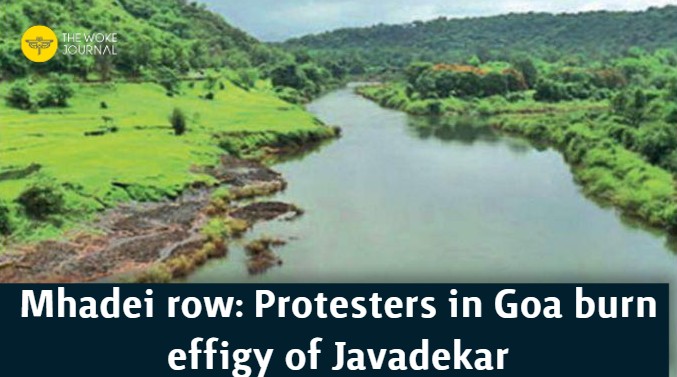 Protesters belonging to the Progressive Front of Goa, on Wednesday, burnt an effigy of Union Minister for Environment and Forests Prakash Javadekar, accusing him of sacrificing the interests of Goa in favor of Karnataka vis a vis the ongoing inter-state dispute over the waters of the Mhadei river.

“Javadekar and his MoEF have unfairly worked against the interests of Goa when it comes to the Mhadei river dispute and the construction of the Kalasa-Banduri diversion project which will destroy Goa’s ecology,” Hridaynath Shirodkar, convener of the Front told reporters, accusing the BJP of using the river dispute for political benefit.

Members of the organization, which is one of the several NGOs which is tracking and drumming up support for the protection of Goa’s interest in the ongoing dispute, as well as opposition to the construction of the Kalasa-Banduri project across the Mhadei river in Karnataka, later burnt an effigy of the Union Minister in Panaji.

Javadekar and Chief Minister Pramod Sawant faced a fresh round of criticism on Tuesday, after the former, incapacity of MoEF Minister, wrote to Karnataka Home Minister Basvaraj Bommai on December 24, saying the Karnataka government could proceed with the water diversion project after the 2018 award of the Mhadei inter-state water dispute is formally notified by the Central Government.

Incidentally, on December 18, a MoEF official in a letter to the Karnataka government had said, that an earlier letter from the central ministry giving a green nod to the Kalasa-Banduri had been kept in abeyance.

The Goa Government has opposed the project claiming diversion of water from the Mhadei basin would cause “ecological devastation” in the coastal state, where nearly half the population of 1.5 million depends on Mhadei river water.

The Mhadei river originates in Karnataka and meets the Arabian Sea near Panaji in Goa, while briefly flowing through Maharashtra.

The inter-state water disputes tribunal, set up by the central government, after hearing the over two-decade-old Mhadei river water sharing dispute among Goa, Karnataka and Maharashtra, in August 2018 allotted 13.42 thousand million cubic feet (TMC) (including 3.9 TMC for diversion into the depleted Malaprabha river basin) to Karnataka and 1.33 TMC to Maharashtra.

There is no Muslim Vote Bank, Says Owaisi