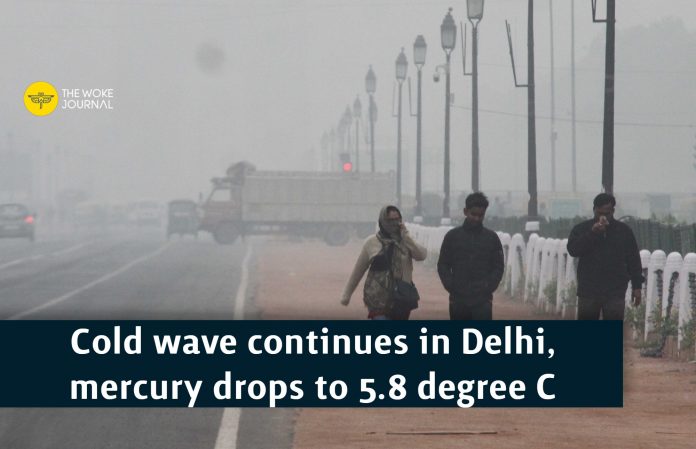 Extreme cold conditions continued in the national capital on Thursday as it witnessed a foggy morning with the mercury dipping to 5.8 degree Celsius, two notches below the season’s average, the weather office said, adding that the city so far has recorded the longest and the extreme cold spell in December month, since 1997.

“Delhi so far has recorded the longest and extremely cold spell in December month, since 1997,” the India Meteorological Department said.

The Met Department said Thursday will remain cold and the conditions will further deteriorate to “severe cold” later in the day. The maximum temperature for Thursday was likely to hover around 15 degrees Celsius, the IMD said.

Not just Delhi, but neighboring Noida, Ghaziabad, Faridabad, and Gurugram were also under the grip of severe cold wave.

The weather office said the cold day to severe cold day conditions will continue in the city till December 28, along with dense to very dense fog at night and morning hours.

On Thursday the visibility at 8.30 a.m. was 700 meters in the national capital.

About 25 trains were delayed due to dense fog in several parts of northern India.

The air quality of the national capital was recorded under the ‘poor’ category. According to the Centre-run System of Air Quality and Weather Forecasting (SAFAR), the overall air quality index (AQI) of Delhi was recorded at 258 on Thursday morning.

“From Friday onwards winds are forecast to slow down for three days. On Friday the AQI is forecast to deteriorate towards the higher end of the very poor category. The dense fog in the morning hours is likely to continue for the next two days under favorable meteorological conditions,” the SAFAR said.

It also predicts that low surface wind speed and low ventilation are forecast for an extended period from Friday and likely to lead to the accumulation of pollutants. By December 29, the AQI is likely to touch higher levels, it said.

Kolkata Steps out to Protest Moral Policing in Metro