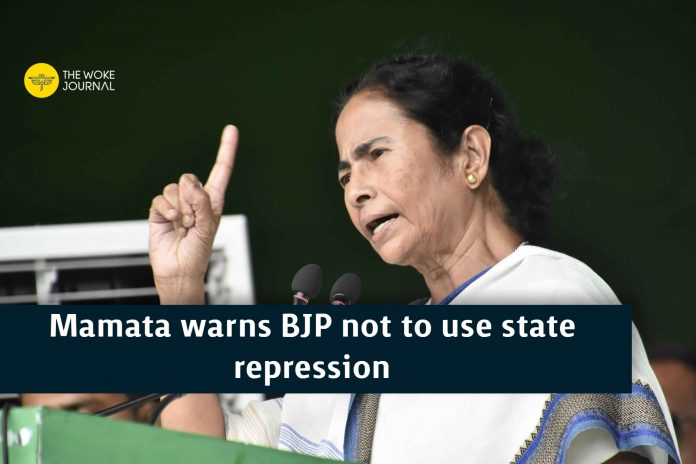 Warning the BJP not to use force in states ruled by it on people protesting against the new citizenship law CAA, West Bengal Chief Minister Mamata Banerjee on Thursday appealed to the students to continue their movement on the issue without bowing to threats and repression.

“In the BJP-ruled states, particularly Uttar Pradesh, brute force is being used to curb the movement. But I would like to tell the BJP: don’t try to muzzle the movement through force. If anybody tries to terrorize people and use brute force, then the people of the country, of Bengal, will not support that.”

She said the agitation for protecting one’s rights will continue, even if “one has to give one’s life for that.”

“The movement will continue till the law is scrapped,” Banerjee said at Rajabazar in north Kolkata before leading yet another march against the controversial Citizenship Amendment Act.

Amid a massive gathering in the Muslim-dominated pocket, Banerjee extended full support to the students fighting against CAA and a proposed National Register of Citizens.

“The students are being threatened that their careers will be finished. They should not bow to these threats and continue their protests,” she said amid blowing of conch shells and beating of kasor (a metal plate that is struck with a stick to make a noise), and incessant slogans of “No CAB, No NRC”.

Despite the CAB or the Citizenship amendment Bill becoming an Act, Trinamool is still using ‘CAB’ in most of its posters and slogans.

The march went past Narkeldanga, Sealdah station, Acharajya Jagadish Chandra Bose Road, Nonapukur before culminating at Mullickbazar, as innumerable people lined both sides of the streets to welcome Banerjee.

This is Banerjee’s fifth march in Kolkata on the issue.

The legislation has led to intense protests in most parts of the country, and over 20 people have died during the agitation so far.

In Bengal, trains, buses and railways stations have been torched and vandalized, and roads and train tracks blockaded by the protesters.