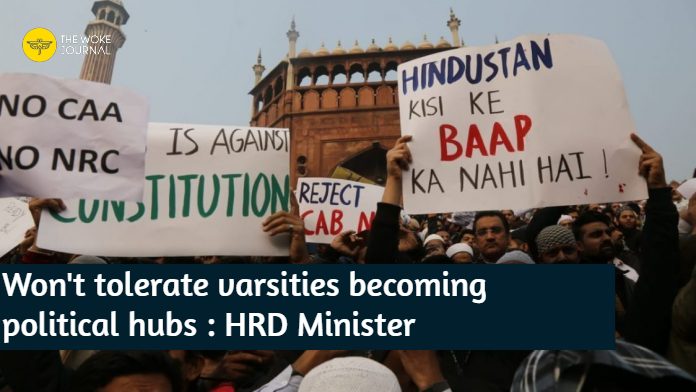 Human Resource Development Minister Ramesh Pokhriyal on Sunday said that the Centre will not tolerate universities becoming hubs of political activities. The controversial statement came in the wake of a raging protest in Indian universities against the centre’s decision to implement nationwide NRC and CAA.

“Anyone is free to engage in political activities, but colleges and universities should be kept out of it, as many students come to study from far-off places. The Narendra Modi government is not going to tolerate this at any cost,” the minister said while addressing a press conference in Kolkata.

The minister also complained that the opposition was spreading fake news and misinformation deliberately.  “It is the Congress, which is responsible for the country’s division on religious grounds, that is spreading misinformation about CAA,” Pokhriyal said.

Selectively keeping silent about the discrimination imbibed within the law, Pokhriyal said that there was equality for every citizen in the country irrespective of religion. Meanwhile, he added, “The Opposition is referring to Article 14 of the Constitution, but the Constitution is for the citizens of the country and it is not a charity house for the whole world.”

Ministers of the BJP cabinet had earlier as well attacked the politically charged students who speak against Sangh politics. Earlier on Saturday, CM Adityanat termed the students anti-nationals and had said that they were studying on ‘Indian money’ but ‘are working for others’.

“Some universities have nothing but to always oppose us and our schemes. Their main work is to raise anti-national slogans. Their upbringing is from Indian money, but they work for others,” he said at a rally in Gorakhpur.

The controversial citizenship amendment act which in the paper is aimed at providing citizenship to refugees from six minority religious communities from Bangladesh, Afghanistan and Pakistan, provided they have lived in India for six years was passed in the parliament on December 11.

The act had invited protest from the entire country for excluding Muslims. The protest was brutally suppressed by using police force by the Indian state. As many as 26 people were killed in clashes and several others ruthlessly injured.

Tulip Garden in Srinagar- a Huge Attraction for Tourists

9 die after consuming sanitizer in Andhra