The company has challenged the complete order of the National Company Law Appellate Tribunal (NCLAT), pronounced on December 18, restoring Mistry as executive Chairman and also his immediate reinstatement as director of Tata Sons and three group companies.

The petition seeks a stay on the NCLAT order in the wake of the TCS Board Meeting slated for January 9.

It is learned that the board meeting is likely to consider the third-quarter earnings and a discussion on the reinstatement of Mistry as a director. The petitioner will urge the apex court to list the matter for urgent hearing after the court reopens after vacations on January 6.

The NCLAT while reinstating ousted chairman Cyrus Mistry, held that the appointment of N. Chandrasekaran as his successor is illegal. The appeals court observed the haste in Mistry’s removal as chairman of the Tata group’s holding company, and this action completely ignored the interest and oppression of minority shareholders.

However, the appellate tribunal has granted the Tata Group four weeks to file an appeal against its judgment. The restoration order will only be operational after this period.

Aryama Sundaram, counsel for Mistry, had told IANS: “NCLT appeared to have gone with the Tata name and the majoritarian view in its earlier judgment. This goes against the grain of Company Law and Companies Act. If one follows the earlier path, then you don’t need provisions in the law that safeguards minority shareholders’ rights.

“This was an erroneous approach. What we did as counsel was that we contested this template. It wasn’t the individual right of Mr. Mistry, which was being trampled, it was the oppression and mismanagement of the board that was in question and this directly impacted varied shareholders including millions of public shareholders.” 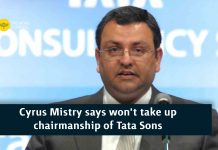 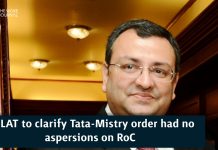 NCLAT to clarify Tata-Mistry order had no aspersions on RoC 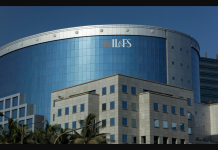