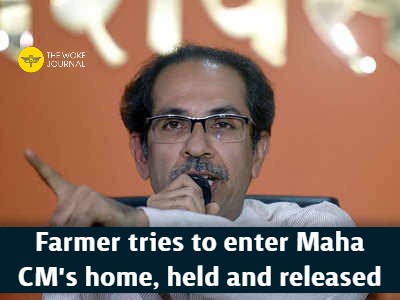 Security officials went into a tizzy when a farmer along with his minor daughter attempted to break security and barge inside ‘Matoshri’, the private residence of Chief Minister Uddhav Thackeray here on Sunday morning, according to sources.

The farmer – identified as Mahendra Deshmukh – had come from Panvel in Raigad district and armed with some filed papers, tried to force his way onto the high-security road outside ‘Matoshri’, in suburban Bandra east.

When the 45-year old Deshmukh and his 11-year old daughter were stopped by a police team, he protested and shouted that he wanted to meet the CM, and demanded to know whether the police would “shoot them”.

However, a team of Kherwadi Police Station stopped them outside the CM’s residence and bundled them into a waiting van bound for the police station.

When news of the commotion reached ‘Matoshri’, Thackeray and son, Environment Minister Aditya Thackeray immediately directed the police to release Deshmukh and his daughter forthwith and get the details of their grievances.

Accordingly, after questioning him in detail, the police set free Deshmukh and his daughter within half an hour.

He claimed to media persons that he was burdened by farming debts for the past eight years and had some bank-related issues which he wanted to highlight before the CM.