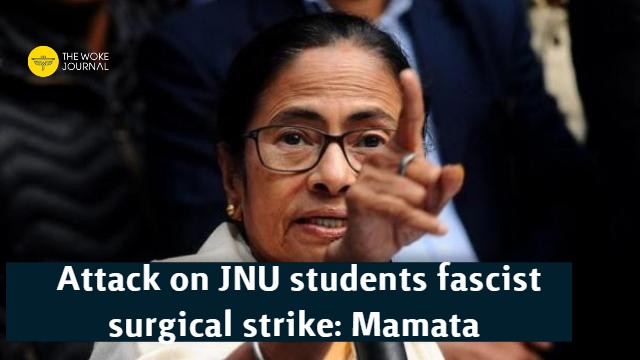 Terming the violence on JNU students and professors as a “fascist surgical strike”, West Bengal Chief Minister Mamata Banerjee on Monday called it “pre-planned” and indicated the BJP was involved in the attack as she appealed to the student community to come together to ensure a joint fight against the Narendra Modi-led Central government.

“This is a fascist surgical strike. We have never seen anything like this before. Everywhere this is going on, be it Lucknow, or Moradabad. They are doing whatever they feel like,” she said.

The Chief Minister said the way students and professors were tortured was “very disturbing”.

“It is very disturbing, not only for me but for all. I feel ashamed at the way democracy has come under vicious attack,” she said.

She appealed to the student community to join forces.

“I appeal to the student community to come together. Let us jointly fight against this government,” Banerjee, who was baptized into politics through student movements, told media persons in Kolkata.

Condemning the violence let loose on the students of the Jawaharlal Nehru University, she accused the BJP of sending “miscreants” and then asking the police to stay inactive.

“They sent the BJP goondas (hoodlums). The police were made inactive. What can the police do? They got instructions from higher-ups not to take any action, but remain, silent spectators, while the BJP got active. This is absolutely wrong,” she said.

The Chief Minister said in a democracy, governments will come and go. “But nobody has the right to run amok just because they have the majority. Whatever functions I perform, they have to be as per constitutional stipulations.”

Later, interacting with media persons at the Ganga Sagar island, Banerjee said: “It is totally a pre-planned attack.”

“Why did the outsiders along with all the hooligans and all the arms go there? They beat up the students and teachers mercilessly.”

Banerjee alleged that through the administration officials were present there, nobody rescued the students who were victims of the violence.

2 flights with 356 passengers from Dubai land in Chennai