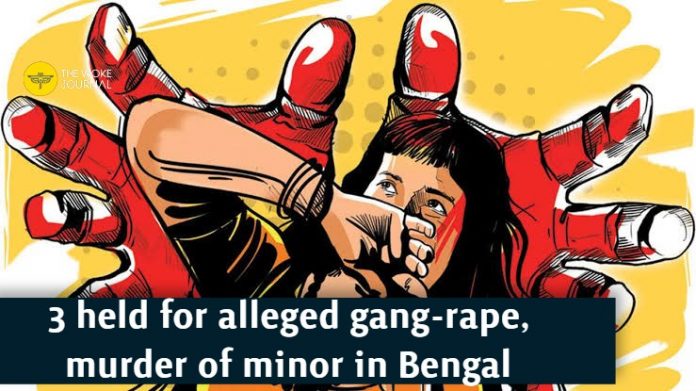 Three persons were arrested on Tuesday in connection with the alleged gang-rape and murder of a minor girl — a virtual re-run of the Hyderabad incident — at Kumarganj in the South Dinajpur district of West Bengal, the police said.

The arrested persons included the lover of the girl, whose charred body, bitten by animals, was discovered on Monday. The girl had left home saying she wanted to buy a dress.

According to the police and the locals, the girl was in a relationship with Mahbubur Mian who took her to a secluded spot in the Belkhor area on Sunday. They were joined by Pankaj Burman and Gautam Burman.

The trio gang-raped and killed her. To destroy the evidence of the crime, they poured petrol and set the corpse ablaze.

On Monday, the body was discovered from under a culvert by locals after they saw stray dogs fighting over charred flesh. The body was sent for autopsy and was identified by the victim’s family members.

After the preliminary investigation, three persons were arrested and presented before the Balurghat sessions court.

The incident triggered rage and indignation. Her relatives, locals and school teachers blocked the National Highway at Fulbari.

Sumi Dutta, a teacher of Phulbari High School, said, “on behalf of the school, we want capital punishment for the perpetrators. Unless such people are punished, the society will not be rectified.”

US Announces Tariffs on $50 Billion in Chinese Imports

Thai PM Thanks Everyone Involved in Cave Rescue Mission