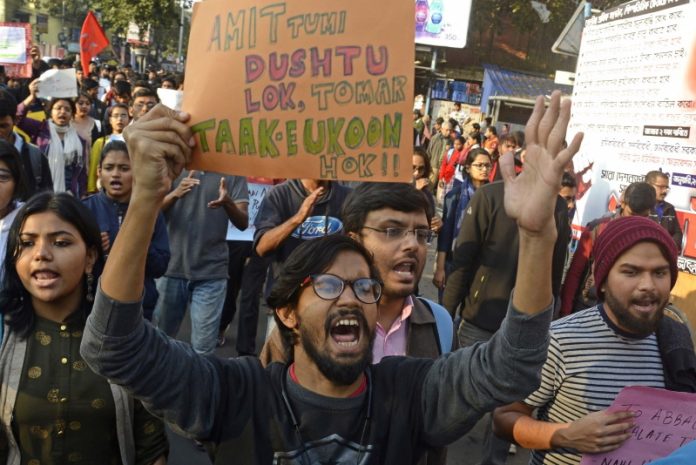 Kolkata and various districts of West Bengal on Monday erupted in protest against the attack on students and professors of the Jawaharlal Nehru University, as students hit the streets in large numbers blockading roads and railway tracks and shouting slogans railing against right-wing Hindutva forces, like ABVP, BJP and the RSS.

Holding aloft banners and posters condemning the “fascist attack” at JNU, the CPI-M affiliated Students Federation of India led a rally from Presidency University and lit fires and burnt an effigy of the RSS’ student wing Akhil Bharatiya Vidyarthi Parishad at the College Street crossing as a mark of protest.

A group of protesting students tried to reach the BJP state headquarters at Muralidhar Sen Lane but were stopped by the police at the nearby P.C. Sarkar Street. The angry students scuffled with the police and accused the state’s Mamata Banerjee government of being “hand in glove” with the BJP.

The All India Democratic Students Organisation (AIDSO) brought out a condemnation rally from near Presidency University and staged a demonstration by obstructing the College Street-M G Road Crossing.

“We are observing this day as protest day across the nation. The goons have carried out dastardly attack on fellow students. We cannot but protest,” said an AIDSO leader.

Jadavpur University, known for its volatile student politics, was another centre of the protests. Through the day, students brought out processions and rallies in the campus and its neighbouring areas.

In the afternoon, hundreds of JU students from the Arts faculty led by the SFI took out a colourful protest march from the campus. With songs and slogans of “Hum Chin ke lenge Azaadi” and “Hallabol Hallabol” on their lips, they went round the campus beating the daffli and clapping in rhythm. A JNU student, who was in the city on leave, also joined the march.

“My friends in JNU are in a panic. Also, they are seething in a rage after the dastardly attack. I couldn’t sit at home and joined the protest here,” she said.

Later, students from all streams rallied together, raising incessant slogans and moving around the campus with a banner “Tomar buke Nathuram, Amar buke Khudiram” (In your heart is Nathuram, in my heart is Khudiram)” in the vanguard. Music director Debojyoti Mishra and filmmaker Aneek Dutta joined the students.

“My age is not the same as yours. But the JNU violence has ignited a fire in me whose age is the same as yours. I believe hitting the streets today won’t be in vain. I have come here as a student. You go ahead with your struggle,” said an emotional Mishra.

Said Dutta: “I won’t ask you to jump into the protests with sticks and spears. Because then they will seize on the opportunity. But continue a structured movement. We will be with you”.

Jadavpur University Teachers Association also took out a procession in the campus condemning the JNU violence.

In West Burdwan district’s Durgapur, the SFI blockaded the rail tracks for some time.

This Village in Arunachal is Home to Only 76 People