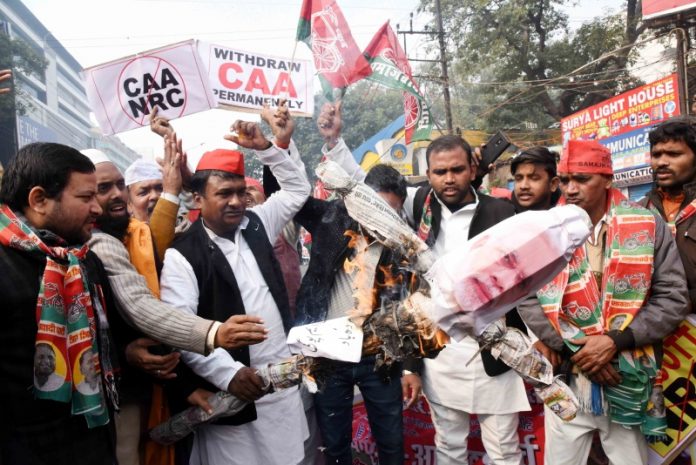 Samajwadi Party workers tonsured their heads in Muzaffarnagar and took out a procession with a black cloth tied on their mouths in Meerut on Tuesday to protest against the assault on students in Jawaharlal Nehru University in Delhi.

In Muzaffarnagar, the SP workers gathered at Ahilyabai Bai Chowk and started the protest against Citizenship Amendment Act (CAA) and violence in JNU.

They also raised slogans to demand employment for the youth.

The protesters staged a dharna and got their heads tonsured.

SP member Aleem Siddiqui said, “The BJP government is trying to disturb the communal harmony by imposing CAA. We are against the BJP’s policy, and to oppose the government’s policies we will keep on protesting every Tuesday.”

Scores of members of Samajwadi Party took to the streets in Meerut to protest against the brutal assault on the students of Delhi’s Jawaharlal Nehru University. The party members covered their mouths with black cloth to showcase that the voices of the masses are being ‘muzzled”.

Babur Chauhan, SP leader, said, “It is a matter of concern that the students are being thrashed with lathis and rods in their hostels in JNU, and the police is yet to take action against the accused.”