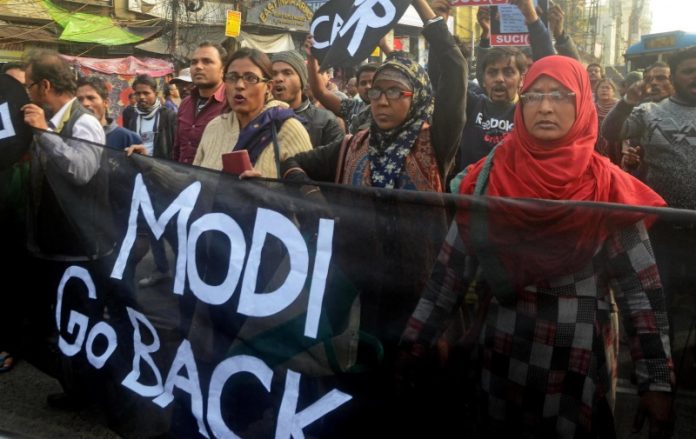 Amid swirling “go back” protests across the city against him, Prime Minister Narendra Modi on Saturday arrived here under heavy security protection for a two-day trip to West Bengal during which he would take part in a number of public programmes in the city and also visit Belur Math in neighbouring Howrah district.

The protestors, sans any political banners but holding aloft the tri-colour and black cloth, filled up the streets in various parts of the city, as they shouted slogans against the Citizenship (Amendment) Act (CAA), the National Register of Citizens (NRC) and the National Population Register (NPR).

The decibel levels increased, as their numbers swelled by the minute, giving tough times to the huge number of police personnel deployed across the city including all vantage points related to the Prime Minister’s visit.

At the forefront were thousands of Leftist students, with members of Congress’ student’s wing Chhatra Parishad also joining in at various points – but none of them carried their party flags.

But more significantly, there were thousands of others, women, senior citizens — some of them even in their 80s — who laid siege on the city roads, and across the route of Modi’s itinerary. Many were agitated over the government on Friday night announcing that the contentious CAA had come into force.

The Prime Minister arrived at the NSCBI airport by an Indian Air Force aircraft at 3-20 PM, when a large number of protestors — mainly owing allegiance to the Left and the Congress — had gathered before two entry gates of the terminal, as a huge posse of personnel had a trying time in keeping the situation under control.

Not wanting to take any chances, the Special Protection Group in-charge of the Prime Minister’s security, and the police personnel opted to fly Modi by an IANF helicopter to the Race Course Maidan.

Meanwhile, the protests intensified outside the airport, as the assembled crowd repeatedly tried to break the police cordon, and after some time the VIP Road — considered the gateway to the city — had to be closed to traffic following scuffles between police and the protestors.

Similar protests were seen near the Race Course, where Modi’s helicopter landed from the airport.

Hundreds of protestors stood close to the Second Hooghly Bridge, armed with posters and banners, but failed to come close to the Race Course as the entire area was thrown under security rings of police and SPG.

At Hastings, the protestors climbed on to the Second Hooghly Bridge and frantically waved black clothes from a distance as Modi’s chopper started disembarking.

The centre of the city — Dharamtala — saw a sea of protestors, whose rising numbers led to the shut down of all roads in the vicinity, with traffic coming to a standstill. All along the stretch, the only refrain through posters, banners, hoardings and slogans was “No NRC, No CAA, go back, Modi”.

There were people from different walks of life – jeans-clad youth to the aged in dhotis, girls in tops, to widows in white sarees. Many of them held banners that read: “See, we are all Indian citizens”.

Some of the protestors enthusiastically wrote on the streets: “we are Indians. Go back Modi”.

The protests had erupted hours before the Prime Minister’s arrival, as student arms of various Left parties, including the CPI-M affiliated Students Federation of India (SFI) held large gatherings in five points of the city — Golpark and Jadavpur 8B bus stand in South Kolkata, Esplanade in central Kolkata and Hatibagan as also the metropolis’ education hub College street in North Kolkata, displaying posters and banners ridiculing the Prime Minister.

Coming together under the banner “Students Against Fascism”, the protestors, joined by those of the Congress-affiliated Chhattra Parishad, held aloft the tri-colour and publicly read the Preamble to the Constitution as they staged demonstrations in each of the venues.

The CAA grants citizenship to six non-Muslim communities — Hindu, Sikh, Buddhist, Jain, Parsi and Christian — who have come to India from Pakistan, Bangladesh and Afghanistan till December 31, 2014, after facing religious persecution.