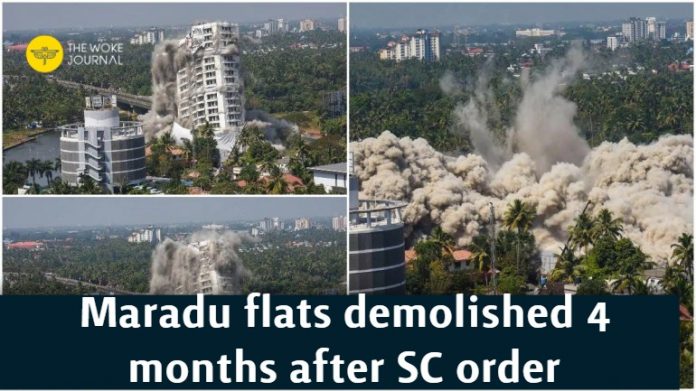 Four months after the Supreme Court ordered the demolition of five apartment blocks at Maradu near here, the last of the apartment block of Golden Kayalorem was razed on Sunday afternoon by pressing of a trigger at 2.30 p.m, 30 minutes behind the original plan.

The 30-minute delay in the second implosion after the experts gave finishing touches to bring Golden Kayalorem down, was due to the location of two-storied children Anganwadi just 10 meters away, which was to be saved.

The blast was conducted with such a precision that no harm was done to the Anganwadi.

on Saturday, around 11.42 a.m, the 19-storied H2O Holy Faith was razed. It was followed by two blocks of Alfa Serene flats.

The Ernakulam district authorities can take pride that the demolition of five blocks over two days went as planned by the explosive experts, without any damage to the neighborhood.

After the occupants (240 families) moved out, authorities removed doors and windows leaving just the skeleton structure to be demolished.

On September 6, the apex court had ordered demolition by September 20 for violating the Coastal Regulation Zone rules, but the Kerala government dilly-dallied on it.

It was only after the court took a tough stance that the Kerala government realized that there was no way out but the demolition of the buildings.

After several rounds of discussions, the demolition date was finalized. Through an open tender, the task of demolition was given to companies that had any experience of such operations.

The social media is abuzz with demolition visuals. One video that has gone viral is the statement of M. Swaraja, young local CPI-M legislator, who had dismissed the apex court directive as a thing that would neven happen.

As the buildings have been demolished, the Kerala government will submit its report to the apex court as a few petitions with regard to the demolition is before the court.

The court had ruled all such petitions would be taken up after the receipt of the demolition report.

Bodies to two Abducted men Found in Jammu and Kashmir