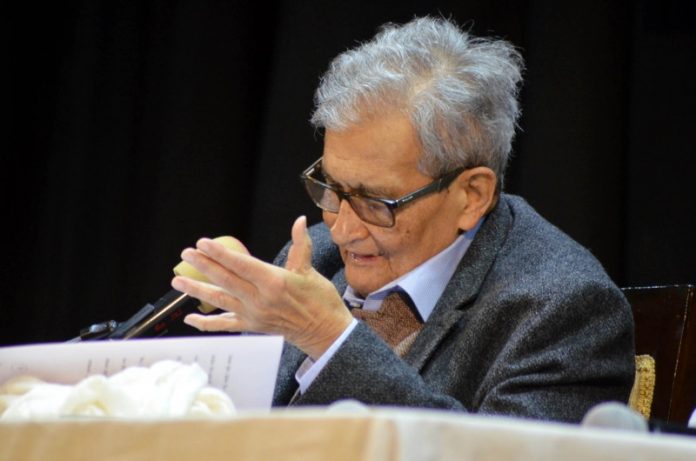 Nobel prize winner economist Amartya Sen on Monday stressed the need for opposition unity in the country for carrying forward the protests against the Citizenship (Amendment) Act (CAA) but said even if unity is not there, the protesters still have to move on and do whatever is necessary.

“Opposition unity is important for any kind of protest. Protest becomes easier then,” Sen told media persons on the sidelines of the first Nabanita Deb Sen Memorial Lecture, which was delivered by him.

Sen, however, said the protests shouldn’t stop if unity among the parties are not there.

“Unity is important if the protest is for a proper cause. But if unity is not there, it doesn’t mean that we will stop protesting.

“As I said, unity makes protests easier, but if unity is not there, we still have to move on and do whatever is necessary,” he added.

Sen, who won the Nobel prize in Economics in 1998, has emerged as one of the strongest civil society voices against the Citizenship (Amendment) Act.

Last week, he called for scrapping the CAA, saying it was not in tune with the Indian constitution.

“Under this Act, whether citizenship will be given or not will be decided after ascertaining the religion of a person. This definitely is not in tune with the Constitution. Such an Act should not have been passed in the first place,” Sen had said.

The CAA seeks to provide Indian nationality to Hindus, Christians, Sikhs, Parsis, Jains and Buddhists fleeing persecution in Pakistan, Afghanistan and Bangladesh on or before December 31, 2014.

As per the Act, such communities will not be treated as illegal immigrants and will be given Indian citizenship.

The legislation, which has come into force from last Friday, has led to intense protests across the country, with students coming out on the streets in thousands in almost all the states. Civil society members, opposition parties and commoners have also joined the protests.