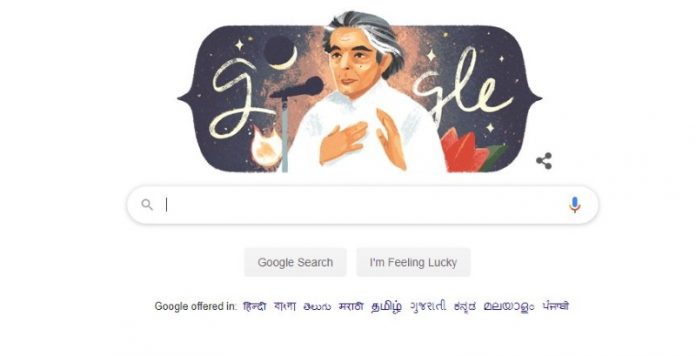 The doodle soothes the moment of Kaifi Azmi on stage reciting his poetry.

Born to Syed Athar Hussain Rizvi in 1919 in Uttar Pradesh’s Azamgarh, Kaifi Azmi’s humanitarian work continues to inspire people. Azmi’s work ranged from love poems, verses that were used in activism and Bollywood songs and screenplays too. He is also remembered for introducing Urdu literature to Indian motion pictures.

He is celebrated as one of the renowned poets of the 20th century. He composed his first poem at the age of 11.

Azmi was one of the most popular 20th-century poets, with his work ranging from love poems, activist verses to Bollywood songs, lyrics and screenplays.

He grew up to be inspired by Mahatma Gandhi’s Quit India movement because of which he left for Mumbai to write for an Urdu newspaper and later in 1943 he became a member of the Progressive Writers’ Association and started writing to achieve socio-economic reforms.

He was honoured with many awards including three Filmfare Awards for Garm Hawa, the Padma Shri Award for Literature and Education and the Sahitya Akademi Fellowship, one of India’s highest literary honours.

Actress Shabana Azmi’s father Kaifi Azmi was also an advocate for women’s rights and he wrote the poem, “Aurat,” in which he spoke of women’s equality.

He also founded the NGO Mijwan Welfare Society (MWS), which today supports educational initiatives to improve the lives of rural women and families.