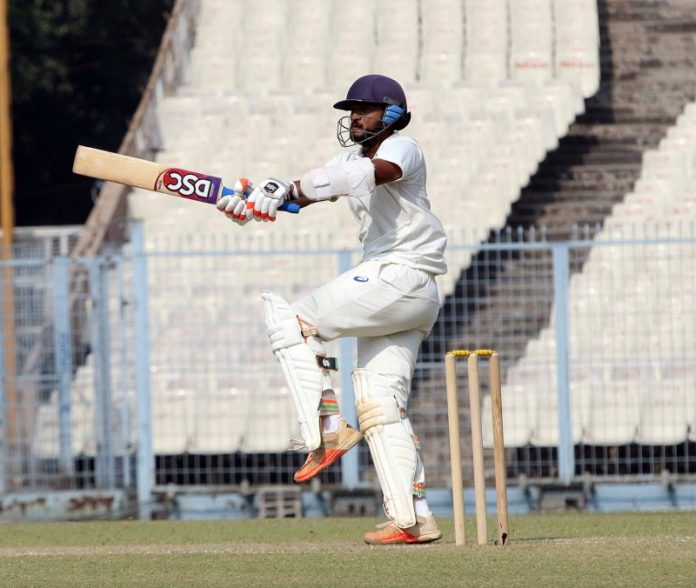 Jalaj Saxena emerged with match-winning figures of 7/55 to hand Kerala their first win in the ongoing season of the Ranji Trophy as the hosts gunned down Punjab for 124 runs on the third day of play in Thiruvananthapuram. Chasing a small 146-run target, the Punjab batsmen failed to click and succumbed before Saxena’s lethal bowling to suffer a 21-run defeat.

Meanwhile, defending champions Vidarbha notched up their second win of the season as they defeated Bengal by nine wickets in Nagpur. Vidarbha overhauled a paltry 59-run target with ease after losing just the wicket of opener Faiz Fazal (18).

Baroda were 179/8 as Vishnu Solanki contributed with 91 runs at the top of the order against Uttar Pradesh in Kanpur. The visitors still trail by 252 runs as Uttar Pradesh had put up a decent 431 runs in their first essay, thanks to tons by Mohammad Saif (123) and Upendra Yadav (100).

Rajasthan ended the third day at 327/7 and took a two-run lead against Gujarat, who were bundled out for 325 in their first innings. Ashok Menaria and Tanveer Ul-Haq were batting on 86 and 30 runs respectively when the day ended in Jaipur.

In Ongole, Hyderabad trail by 219 runs as they ended the day at 45/3 in their second innings against Andhra, who had declared their first essay at 489/8 in reply to the former’s 225.

Skipper Naman Ojha’s 118 along with Yash Dubey’s unbeaten 79 helped Madhya Pradesh take a 188-run lead as they were 308/5 in their second innings against Railways at stumps on day three.

After putting up a massive 581/7 in their first essay, Saurashtra wrapped up Karnataka for 171 runs, courtesy a fifer by Jaydev Unadkat (5/49). Asked to follow-on, Karnataka were 30 for no loss however, they still trail by 380 runs.

In reply to Mumbai’s 488, Tamil Nadu were 249/7 at stumps with Ravichandran Ashwin and Ravisrinivasan Sai Kishore batting on 32 and 17 runs respectively. For Mumbai, Shams Mulani, Tushar Deshpande and Royston Dias picked up two wickets each.

Chhattisgarh were trailing by 121 runs as their scorecard read 25/1 in their second essay against hosts Assam in Guwahati. The visitors had put up a 318 run total in their first innings following which Assam rode skipper Gokul Sharma’s 129 and Rishav Das’ 99 to reach 464/9 before declaring their innings.

Jharkhand is likely to suffer a defeat against Maharashtra as the visitors were 47/1 in their second innings in Nagothane. In reply to Maharashtra’s decent 434, Jharkhand were bowled out for a paltry 170 and were eventually asked for follow-on.

Uttarakhand were trailing by 168 runs as they were 21/1 in their second innings against Tripura. Earlier, in reply to Uttarakhand’s paltry first innings score of 90 runs, Harmeet Singh’s 102 and Rajat Dey’s 54 had guided Tripura to 279/5(d).

Jammu and Kashmir took a healthy 302-run lead against Services after ending the third day at 184/5 in their second innings. After managing 360 in their first essay, Jammu and Kashmir had wrapped up their opponents for 242 runs.

Chasing a 179-run target, Odisha were reduced to 147/7 as Haryana’s Ajit Chahal starred with impressive figures of 6/65 in Rohtak.

Bihar registered their second win of the season as they hammered Manipur by an innings and 183 runs to bag seven crucial points in their kitty.

Sikkim were trailing by 27 runs as they ended the day at 69/3 against hosts Chandigarh. The home side had earlier put up 360 runs in their first essay while replying to the visitor’s moderate total of 264 runs.

Nagaland took a small 84-run lead after closing the third day’s play at 10 for no loss against Arunachal Pradesh. In their first essay, Nagaland had amassed a healthy 534/7 before wrapping up their opponents for 460 runs in Dimapur.