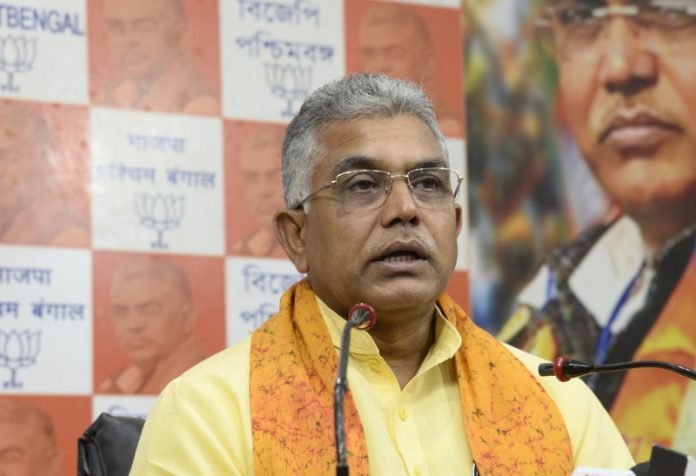 Even as two police complaints were lodged on Tuesday against BJP West Bengal unit president Dilip Ghosh for his threat to “beat up” and “shoot’ ” anti-CAA protesters, the leader remained unmoved, as he alleged that the state has emerged as “hub of anti-nationals” during the Trinamool Congress rule.

The first complaint was registered in Ranaghat police station of Nadia district by a Trinamool Congress worker Krishnendu Banerjee, who alleged that Ghosh was inciting communal passion.

The second complaint was filed at Habra police station of 24 Parganas North district by another Trinamool worker.

State food and supplies minister and party’s district president Jyotipriyo Mullick said the complaint was being “treated as an FIR”.

“Lot of people are apprehensive that Dilip Ghosh could kill or shoot them. So the complaint was filed,” Mullick said.

Meanwhile, speaking at a programme in Kharagpur of Midnapore West district, Ghosh said there has been a collapse of law and order in most districts.

“Under Trinamool rule, Bengal has become a hub of anti-nationals. It is a safe haven for terrorists and enemies of the state,” he alleged.

He said the situation has deteriorated with the Trinamool extending patronage to such people.

Addressing a party rally on Sunday in Ranaghat, about 80 km from Kolkata, Ghosh went ballistic saying the governments in BJP-ruled Assam, Karnataka and Uttar Pradesh have shot dead “like dogs” those protesting against the new Citizenship (Amendment) Act.

Alleging there were one crore infiltrators in the state, Ghosh accused them of destroying public property worth Rs 500-600 crore during the violent protests against the CAA last month.

“This (violence) happened because there was neither any baton charge, nor firing, nor was any FIR filed. Why? Didi’s (elder sister – as Mamata Banerjee is popularly called) police did not arrest anybody… because they vote for her.”

He then referred to the three states ruled by the BJP.

“In Assam, Karnataka and Uttar Pradesh, our governments have shot dead these devils like dogs. They were taken elsewhere and then again cases were filed against them. They will come here, eat, stay, and then destroy property, do they think this is their zamindari?”

He said once a BJP government was installed in Bengal: “We will hit them with sticks, shoot them, and also send them to jail. Our governments have done exactly that. Mamata Banerjee doesn’t have the guts to do anything.”