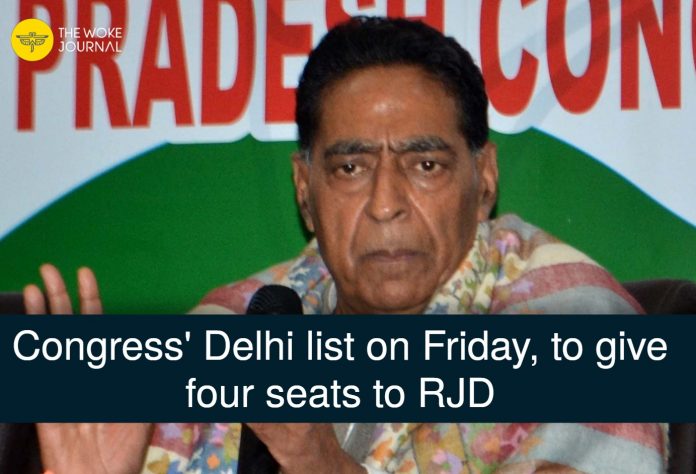 The Congress is ready to give the Rashtriya Janata Dal four seats to contest in the February 8 Delhi Assembly elections even as it will come up with its own list of candidates on Friday, sources said on Thursday.

Though the seats to be given to the RJD are not decided yet, those with pockets of voters from Bihar will be preferred, the sources added.

With the RJD demanding its share of seats in the Delhi polls, the Congress is ready to play along as it does not want to upset Lalu Prasad’s party ahead of the Bihar Assembly elections later this year.

The Congress aims to neutralize BJP leader Manoj Tiwari’s influence among Delhi voters by roping in the RJD. There is a sizeable number of voters from Bihar and eastern Uttar Pradesh in the national capital.

Congress Delhi unit President Subhash Chopra said: “We have discussed most of the seats and the list will be out tomorrow.”

Asked about senior party leaders contesting the elections, he said the Congress high command will decide on the issue. “I will, however, not contest as I have to manage the elections,” he added.

The Congress has not been able to finalize its candidate for the New Delhi Assembly segment, which Chief Minister Arvind Kejriwal is contesting.

As for senior Congress leader Ajay Maken leaving for the United States since his daughter is said to be unwell, Chopra maintained that anyone could face an emergency in the family.