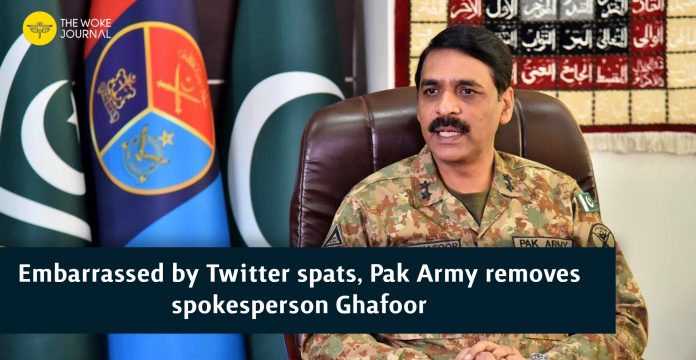 Sources in Islamabad said that Army Chief General Qamar Javed Bajwa was so perturbed by the ridicule Pakistan military was drawing because of Ghafoor’s acrimonious social media engagements that he decided to remove him from the post of Director-General, Inter-Services Public Relations (ISPR).

Ghafoor has been appointed GOC of 40 Division Okara in Pakistan, sources said.

The transfer comes just a couple of days after Ghafoor was trolled for posting a doctored video of war hero and retired Indian Air Force Air Marshal Denzil Keelor. Ghafoor later admitted that the Keelor clip was doctored.

In another spat, he exchanged heated comments with a Pakistani journalist Sana Bucha on Twitter. He later deleted his tweet, “Should an already butchered be butchered again?” which drew a lot of flak from the journalistic community. Many accused Ghafoor of often tweeting in an inebriated state.

Sources in Islamabad said that General Bajwa took the decision because Ghafoor’s frequent spats on Twitter were affecting the Pakistan military’s image in Pakistan and abroad.