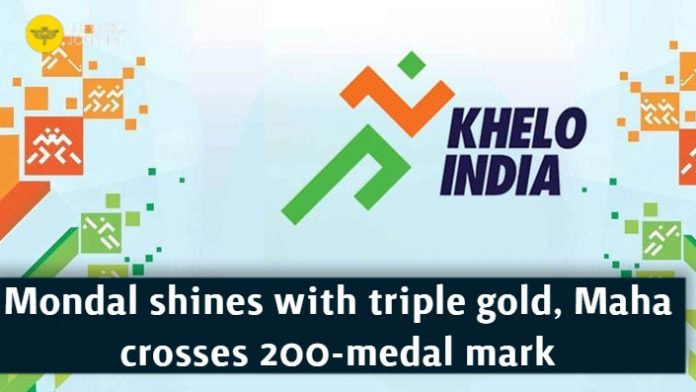 West Bengals Soubrity Mondal claimed three gold medals in the swimming competition in the Khelo India Youth Games (KIYG) on Monday but Maharashtras Kenisha Gupta and Karnataka’s Srihari Nataraj were well on course to become the most successful athletes here.

Though only their swimmers found gold on Monday, Maharashtra remained entrenched at the top of the medals tally with 63 gold. They crossed the 200-medal mark, finishing the day with 204 after their Girls Under-21 basketball team fell at the final hurdle to Kerala 63-88 in the title clash.

Haryana’s only gold came through their Girls Under-17 hockey team, beating Jharkhand. Haryana led 2-1 through goals by Pinki and Dimple but Deepika Soreng completed her brace in the last minute to force a shootout. Kanika Siwach and Sonam scored for Haryana while Deepika Soreng found the mark for Jharkhand.

Mondal won gold in the Girls Under-21 200m Individual Medley in 2:32.52 and 200m Backstroke in 2:26.05, making the most of the absence of Gujarat ace Maana Patel, who tore an ankle ligament at the start of the 100m race a couple of days ago. The West Bengal swimmer then helped the State’s 4x100m Medley Relay squad win gold in the face of stiff competition from Assam. Kenisha Gupta and Srihari Nataraj won two gold each on Monday.

Assam’s Suditya Boruah handed the Maharashtra weightlifters a rare defeat at the Bhogeswari Phukanani Indoor Stadium, winning the boys under-17 89kg class gold with total lifts of 251kg. He left Maharashtra lads Ritesh Rajendra Mhaishale (248kg) and Sanidhya Sanjay More (243kg) in his wake to give the home crowd much to cheer as they won two of the six gold at stake on Monday.

Sikkim joined the medals chart with a bronze from weightlifting. Prema Tshering Sherpa made it to the podium, thanks in no uncertain terms to Uttarakhand’s Bittu Rajput registering no lift in Snatch and Haryana’s Parveen failing to lift his chosen entry in the clean and jerk load of 150kg on three attempts. Parveen was the leader after the Snatch lifts, with a best of 124kg.

In the badminton under-21 finals, top-seeded Satish Kumar (Tamil Nadu) will take on No. 2 Amit Rathore (Madhya Pradesh) in the boys’ match. The top two seeds Unnati Bisht (Uttarakhand) and Mir Tasnim Irfan Ali (Gujarat) will clash for the girls’ gold. Mir Tasnim Ali won her quarterfinal (and not as reported on Sunday) to beat Maharashtra’s Smit Toshniwal in the semi-finals.

Punjab and Kerala ran out easy winners in the boys and girls under-21 basketball finals where they beat Tamil Nadu and Maharashtra respectively. In the under-17 finals, Rajasthan boys overcame Delhi’s third-quarter surge of 30 points with smart play to win 86-79. The girls’ final was thrilling as Tamil Nadu scored two points in the final minute and held on to win 59-57.