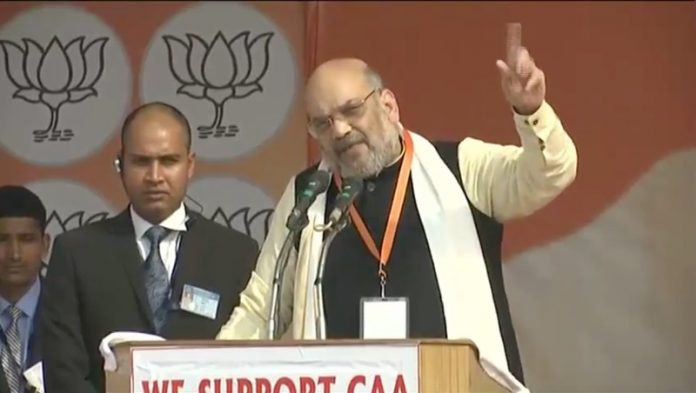 “My daughters Sumaiya and Fauzia have been booked for violating prohibitory orders but what about Amit Shah who addressed a rally of thousands in the state capital on Tuesday? Surely there were more than four people in the rally. How can there be two sets of the same law for different people?” he asked.

The BJP spokesman Chandra Mohan argued that permission for the rally had been duly taken but the poet asked if permission be granted to violate a law.

Uttar Pradesh Congress president Ajay Kumar Lallu supported Munawwar Rana and said, “Why is Section 144 not for the Union Home Minister? Common people are being picked up for violating prohibitory orders but when it comes to the ruling BJP, the administration happily gives them permission to violate a law.”

Lucknow District Magistrate Abhishek Prakash, when asked, said that permission for the rally had been duly granted.

He said that requisite permission had also been taken from departments like the municipal corporation, public works department (PWD) and police. He was evasive when asked about prohibitory orders.

Munawwar Rana, however, demanded to know when a case be registered against Home Minister Amit Shah who violated the same orders?

He said that the case action against his daughters and others protesting against the CAA and the National Register of Citizens (NRC) would be ‘injustice’ if Shah’s rally was termed “legal”.

“This is like putting the children of fakirs — who live on alms — behind bars when a ‘shah’ (king) comes to the city. I have told my daughters not to get scared by the registration of a case. Maximum punishment will be a jail term or death,” said the poet.

The poet’s daughters were among the 160, named and unnamed, women booked by police on Monday night for allegedly defying prohibitory orders.

The protests at the historical Clock Tower in old Lucknow began on Friday and have continued with hundreds of women braving the cold since then.

Support for the protesters has been growing with leaders from various political parties visiting the site and announcing their support to the women.

Meanwhile, U.P. State Commission for Protection of Child Rights (UPSCPCR) has sent a letter to the UP DGP O P Singh, saying that the presence of children at the protest site was a violation of their rights and action against the parents should be taken without delay.

Zoya Hasan, a housewife who is protest with her two children, aged 6 and 8, reacted strongly to the UPSCPCR letter and said, “Let them come and ask my children if they have been forced by us to stay here. I have been asking them to go home but they refuse to do so. Do you think any parent will subject their children to torture? Let them put all of us in jail but we will not budge an inch from here.”

Faculty Concerned Over State Intervention and Repression in Pakistan Universities