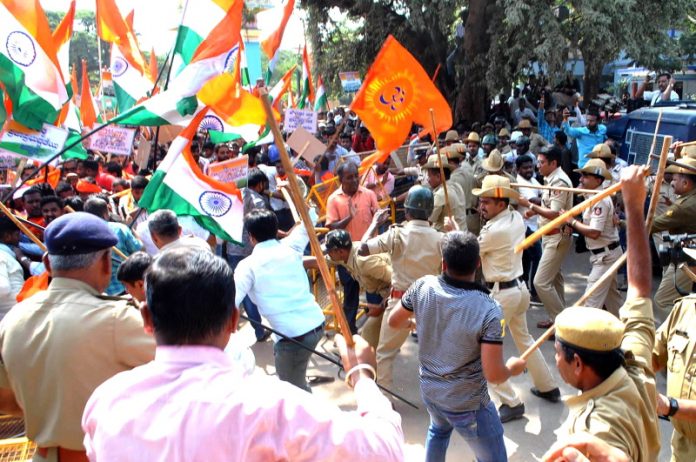 Thousands of people protested against the Citizenship Amendment Act (CAA) here and urged the Central government to repeal it, the police said on Tuesday.

“About 75,000 people from the city and nearby areas assembled at the KCT College grounds to participate in a massive event organised by the Karnataka People’s Forum to protest against the CAA and the National Register of Citizens (NRC),” Kalaburagi Police Commissioner M.N. Nagaraj told IANS over phone.

Kalaburagi is about 600km north of Bengaluru.

Clarifying that the extended college grounds have a capacity to accommodate about 1 lakh people, the police chief refuted claims on social media that about six lakh people attended the event.

“It is an exaggeration to say there were six lakh people at the venue, as the population of the city and its surroundings is itself around 5.5 lakh. My estimate is about 70,000-75,000 people were present for the four-hour long event, which was extended by an hour beyond the three-hour permission,” Nagaraj, who was present at the spot, asserted.

Terming the CAA anti-people, Kharge told the gathering that people across the country would not rest till the draconian law was withdrawn.

“The people will also not allow the extension of NRC across the country from Assam where it was imposed against the will of its citizens,” noted Kharge, who was a two-time Lok Sabha member from the Gulbarga constituency till April 2019.

Accusing the BJP-led NDA government of polarising the people, Yechury said in Hindi that CAA and NRC were designed to isolate deprived communities and make them feel like “paraiah” (outcast) within the country.

“The intention of CAA and NRC is to isolate Muslims, Dalits, Adivasis, nomadic tribes and downtrodden communities, which have been marginalised and suppressed,” Yechury said.

Terming the NRC as communal, Kumaraswamy said its proposed extension to other states would deny the people the right to live though they are citizens of the country since birth.