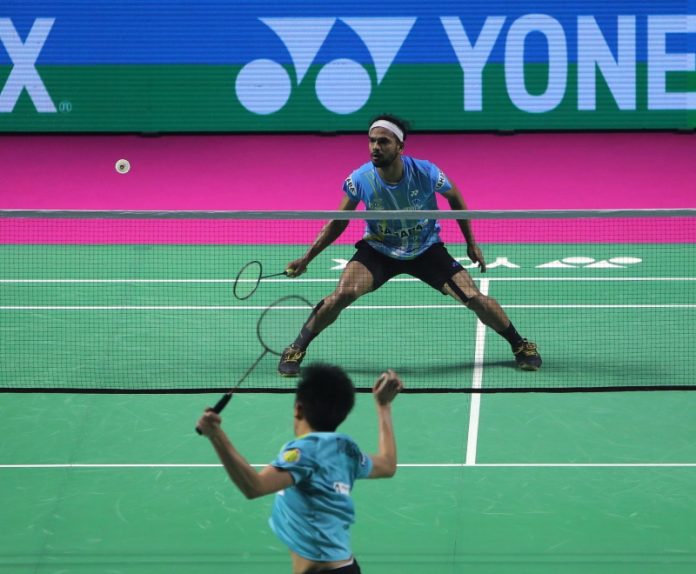 World No. 46 Subhankar Dey kept his calm under pressure to take the Awadhe Warriors to a 4-3 win against the North Eastern Warriors in their first tie at the ongoing Premier Badminton League.

With the two teams locked at 3-3, it boiled down to the men’s singles face-off between Dey and Tanongsak Saensomboonsuk to decide the outcome of the penultimate tie on Thursday evening.

Dey had lost his solitary encounter to the Thai at the Malaysia Masters last year, but this time he came better prepared. He won the match 15-9, 15-13 that gifted the Awadhe brigade the victory at the end.

In an exhilarating battle between two of Hong Kong’s best shuttlers, Yiu held his nerves and dug deep to see off his senior compatriot, Wong Wing Ki Vincent of the Awadhe Warriors 13-15, 15-10, 15-11. Lee was initially troubled by Vincent’s aggressive show, but once he found his rhythm, he was able to take the match away from the former World No. 10.

Christinna Pedersen made a winning return to the league with a hard-fought win that had the crowd on the edge of their seats. The Danish star, who has two Olympic medals on her illustrious resume, had mesmerised her Indian fans with her exquisite touches in her two previous appearances for the Lucknow-based franchise.

This time it was no different. The former World No. 1 showed her grit and tenacity in partnership with fellow former World No. 1 Ko Sung Hyun to get the Awadhe Warriors off to a tight 8-15, 15-11, 15-14 win over the North Eastern Warriors’ Bodin Isara and Kim Ha Na.

World No. 14 Beiwen Zhang and World No. 8 Michelle Li have a close rivalry with Awadhe Warriors’ Zhang. But Li did not let that bother as she put up a remarkable performance to see off Zhang 15-13, 15-14.

With the Guwahati-based franchise leading 3-1, it was all left to the Trump pair of Ko Sung Hyun and Shin Baek Cheol to bring Awadhe back into contention. Hyun’s partnership with former world champion Shin Baek Cheol yielded three titles last year and they weaved magic on the court once again to stave off a spirited challenge from North Eastern Warriors’ Krishna Prasad Garaga and Lee Yong Dae to win 8-15, 15-14, 15-12.