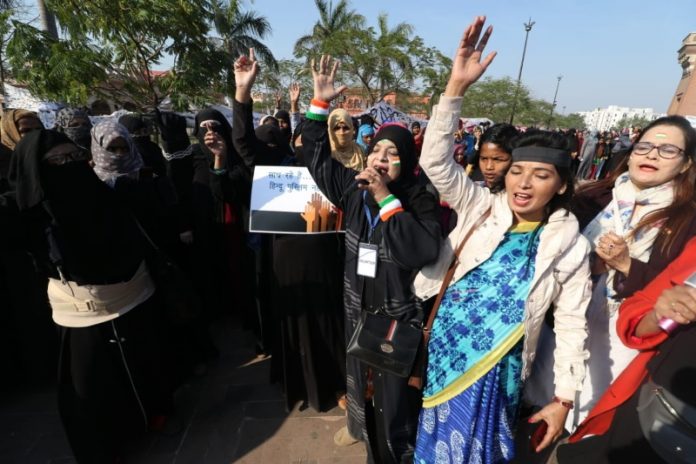 The all women protest against Citizenship Amendment Act (CAA) and National Register of Citizens (NRC) at Lucknow’s Clock Tower continued on Saturday despite every effort by the administration to end it.

A woman, who has been at the protest site with her four-year-old child, said: “Citizens across the country are on the streets protesting against the new law, which is against the very basic tenets of Indian Constitution.

“The country is in the hands of those who are trying to destroy India. We Muslim women have to take out our veil and come on to the streets to protect India’s democracy.”

Another woman said: “God has given us the power to protect our country from the fascist forces and we will keep fighting till the very end.”

Women and children have been protesting against the CAA and NRC at the iconic venue in the Heritage Circle of the Uttar Pradesh capital for the last many days and have refused to budge despite repeated threats of eviction by the local administration.

“This law is 100 per cent wrong. Those sitting in power presently should understand that this law has been negated by the people, so they should withdraw it.

“But the government is trying every possible trick to discredit the protesters by levelling baseless charges that we have taken money to protest. This is ridiculous.”

The protesters are also raising slogans and are holding placards with ‘No to NRC’, ‘Will not show papers’ written on them.

Shabana, another protester, said: “We have been a thorn in the eyes of the government since the day we began the protest. Some NGOs handed out blankets, biscuits and water but the policemen took them away.

“The Police also doused the bonfires, lit to help keep the women warm and cope with the cold wave. Not only this, the police even put pressure on those running the nearby toilet to extort money from us.

“But we will not back out even against all odds and will continue protesting.