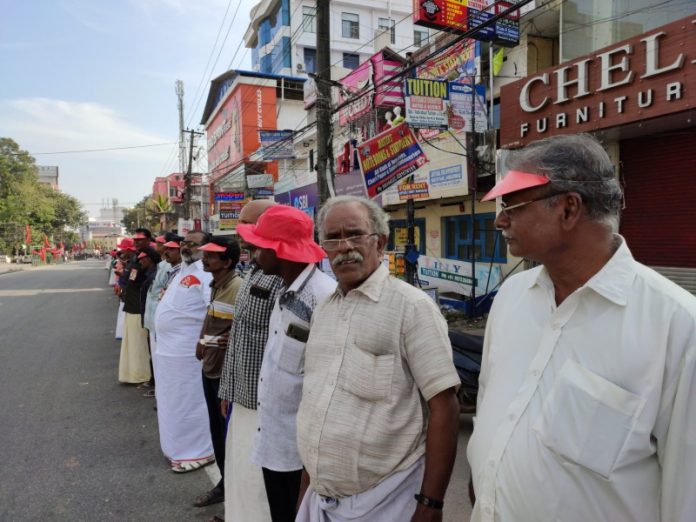 Billed as one of the biggest protests against the CAA, Kerala’s CPI-M-led Left Democratic Front (LDF) on Sunday organised a human chain extending from Kasargod to the Tamil Nadu border near here, involving the participation of an estimated seven million people.

People came out in large numbers to participate. After a trial at 3.30 p.m., the chain running on the side of the National Highway from Kasargode to Thiruvananthapuram, a distance of about 600 km, began forming at 4 p.m.

The preamble of the Constitution was the first readout and then every participant took a pledge to be ready to give their lives to protect the Constitution, “which is now facing threat on account of the CAA by the BJP-led Central government”.

The human chain was the brainchild of the CPI-M and at the northern point in Kasargode, its Politburo member S.Ramachandran Pillai was first in the chain and at the southernmost end, at the Tamil Nadu border at Kaliyakevala near here, was another Politburo member M.A. Baby.

“Kerala has always led numerous protests and also shown to the rest of the country, what very strong protests can lead to. This show has been near total and even though the leadership of the opposition is not taking part in this, numerous of their supporters have taken part and this shows that we are all one to a wrong decision of the Centre,” Baby told edia soon after he finished taking part in the human chain.

Chief Minister Pinarayi Vijayan, along with his family members, stood in the chain at Palyam in the heart of the state capital.

Soon after his participation, Vijayan told a public meeting that all the protests against CAA was so huge and massive across the state.

“We can really be proud that how protests can be held peacefully when the entire population unites. Today also we have seen the same being repeated in the form of a human chain. The participation has been overwhelming and the message is very clear that we do not accept CAA as this divides people based on religion. Even various countries, as well as the UN, have said that this should not happen.

“In Kerala, we have already made it clear that neither NPR nor NRC will happen. We cannot rest until the CAA is withdrawn,” he said.

Though the opposition Congress-led United Democratic Front was not part of the chain as it was a CPI-M -organised protest, among those who came and joined the chain included Christian bishops, priests, nuns, Muslim clerics, film personalities, poets, writers, and numerous people from the socio-cultural fields.

At Kayamkulam in Alappuzha district, local CPI-M legislator, Prathiba Hari, who attended a marriage in her constituency, extended an invite to the newly-wed couple, and they readily agreed to join it.

“I do not have much knowledge about things, but when we were asked to take part, we readily agreed. We wish all the best for the success of the human chain,” said the bride, fully decked in gold. The bridegroom, who was dressed in a suit, said: “We came straight to take part from the marriage hall and once this programme is over, we will go home.”

At Kollam when the function was going on a youth shouting “Vande Mataram” slashed his wrist.

Police who were there immediately took him to a hospital for medical attention.

State Minister J. Mercykutty, who was also at the spot, claimed that the youth seemed intoxicated.

Participants from Pathanamthitta and Kottayam districts joined the network in Alappuzha district, while the hilly districts of Idukki and Wayanad organised the human chains in their areas, which were not part of the main chain running from Kasargode to the Tamil Nadu border.

Ever since the passing of the Citizenship Amendment Act last December, Kerala has been witnessing numerous protests including a joint one by the ruling and opposition parties.

The Assembly has passed a resolution demanding the withdrawal of the CAA and later, the state government filed a petition in the Supreme Court seeking to declare the CAA as unconstitutional.

The last time the LDF organised a similar human chain was on December 29, 2016, to protest against the hardships faced by the people following demonetisation.

On January 1, 2019, the Pinarayi Vijayan-led government held a Women’s Wall to uphold renaissance values and gender equality in society, with the aim of welcoming the Supreme Court’s decision to open the Sabarimala temple to women of all ages, which was strongly opposed by the Sangh Parivar forces and the Congress-led UDF.

No approved treatments yet for COVID19, says WHO