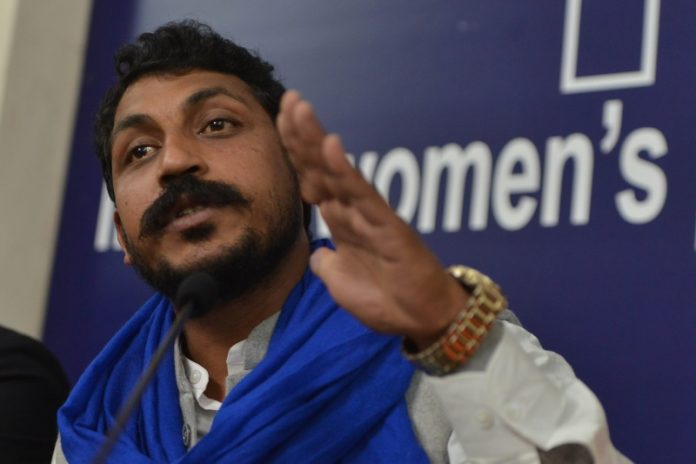 Bhim Army chief Chandra Shekhar Azad, who was detained in Hyderabad Sunday evening ahead of the anti-Citizenship Amendment Act (CAA) meetings, was being sent back to Delhi on Monday.

The Dalit leader tweeted Monday morning that the police brought him to Hyderabad Airport and was sending him to Delhi.

Azad, who had arrived in Hyderabad to address two protest meetings against the Citizenship (Amendment) Act, alleged that the dictatorship in Telangana is at its peak.

“First, our people were beaten up with sticks and then I was arrested. Now, they have brought me to Hyderabad airport and sending back to Delhi,” he wrote in Hindi.

“Hyderabad police is forcibly taking us to Hyderabad Airport and send us to Delhi,” another Bhim Army leader Kush Ambedkarwadi, who was accompanying Azad, tweeted earlier.

Azad, Kush and lawyer Mehmood Pracha were detained outside a hotel as they were on their way to Crystal Garden in Hyderabad’s Mehdipatnam to address a protest meeting.

Police said Azad was detained under Section 151 of the Indian Penal Code as there was no permission for the meeting.

It was not clear where they were kept on Sunday night. Their whereabouts were not known till late in the night and Azad’s supporters had even tried to stage a protest at the office of Hyderabad police commissioner to demand his release. They were also detained.

Followers of Azad took to Twitter to condemn the action of Hyderabad police and demanded his immediate release.

Azad, who has become a prominent face of the anti-CAA protests across the country, had arrived in Hyderabad to attend two meetings against the CAA, organised by the alumni of the Tata Institute of Social Sciences (TISS) and All India Dalit Muslim Adivasi Progressive Front (AIDMPAF).

They were shifted from one police station to the another, and some supporters following the police vehicle, however, lost track of it.

Earlier, the police had started detaining the activists of the AIDMPAF and other supporters of Azad reaching the venue. It dispersed many others who came to attend the meet.

Azad’s detention came 10 days after his release on bail from the Tihar Jail in Delhi. He was arrested by the Delhi police on December 20 on charges of inciting people during the anti-CAA protest. He was held when he tried to take out a march from the Jamia Masjid to Jantar Mantar.