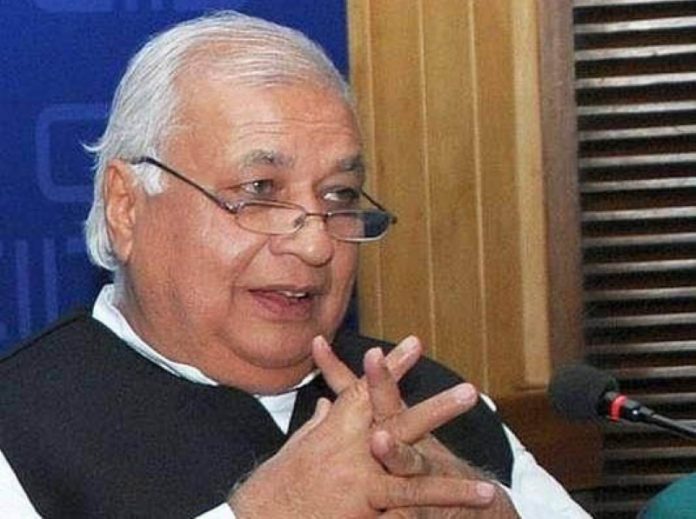 Congress members who blocked Kerala Governor Arif Mohammad Khan as he arrived in the Assembly for the budget session, was forcefully removed by the watch and ward staff, making way for him to read out his address to the assembly.

Khan along with Chief Minister Pinarayi Vijayan, Speaker P. Sreeramakrishnan and State Parliamentary Affairs Minister A.K. Balan and others were stopped in the well of the House by Congress members.

Khan, spotting a wide smile, welcomed the protesters with folded hands and waited for things to cool down.

But, the adamant opposition carrying placards written ‘call back Governor’ and raising slogans of “recall Governor”, was seen engaged in a heated argument with the watch and ward staff.

Later, the speaker also tried to pacify the agitating opposition to make way for the Governor but failed to prevail. The opposition legislators were continuously raising slogans against the Governor and the Kerala government.

After about 10 minutes, a large contingent of the watch and ward staff arrived and was seen engaged in a tiff with the protesters and made way for Khan to go forward to the podium, to begin his address.

As Khan was reading out his address, Leader of Opposition Ramesh Chennithala was seen speaking, but was not audible and soon he announced that he is boycotting the day’s session and took the entire opposition out of the house.

Later speaking to the media at the entrance gate of the assembly, where they are staging a sit-in protest, Chennithala said its a shame that Vijayan had to catch the feet of the Governor as was evident from what has now come out.

“What Vijayan should have done was to support my resolution that seeks to withdraw the governor. Khan is an agent of the RSS and Amit Shah and today Vijayan has succumbed before them as his SNC Lavalin corruption case in which he is seventh accused is coming before the Supreme Court next week and he wants their (Modi and Shah) gratis. To get that, he has enacted this drama on CAA. The other day he staged a human wall against the CAA and in the evening was seen in the company of Khan. We feel ashamed the way Vijayan is going about,” said Chennithala.