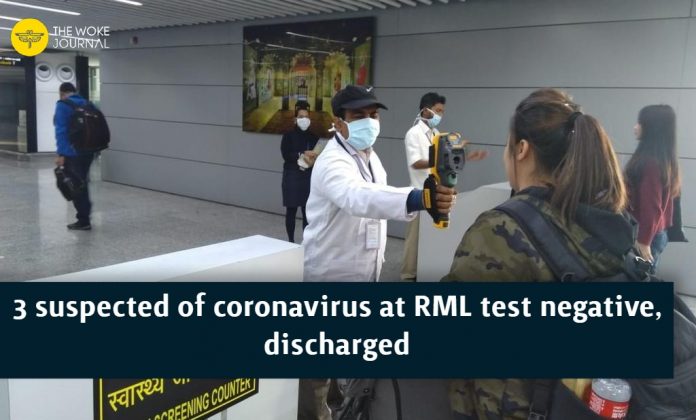 All three patients who were admitted to Ram Manohar Lohia Hospital in Delhi on Monday on suspicion of new coronavirus infection, have been discharged from the hospital, sources said.

Smriti Tiwari, RML Hospital spokesperson, told IANS that the tests on the three patients have shown negative for the virus.

Three persons suspected to be infected with the Novel Coronavirus had been admitted to the hospital on Monday.

Tiwari had earlier told IANS that the three had traveled to China. She said they were placed under isolation.

Their samples were sent to the National Centre for Disease Control (NCDC) for tests which resulted negatively on Thursday.

The RML has been selected as the nodal center for the isolation and treatment of suspected and confirmed coronavirus cases. On Monday, a team led by Sujeet Singh, Director of NCDC, visited the RML to review the hospital’s preparedness.

The Union Health Ministry has urged people to avoid non-essential travel to China. It has installed all facilities for thermal screening at 21 airports and has issued advisories to the shipping and aviation sectors.

Meanwhile, one positive case of Novel Coronavirus has been reported from Kerala. “The patient is stable and is being closely monitored,” said a statement.

The government has stepped up efforts to monitor such cases and prevent the virus spread. The All India Institute of Medical Sciences (AIIMS) has said they have isolation centers ready to accommodate suspected or confirmed cases of Novel Coronavirus.

Wuhan city of China witnessed an outbreak of the new strain of coronavirus last month. Since then the death toll in China from the new virus has risen to 170 with 7,711 confirmed cases, as repatriation flights for foreign nationals continued.

Finland reported its first case on Wednesday. Several cases in Taiwan were also included in the national count. The symptoms of the new coronavirus, provisionally designated by the WHO as 2019-nCoV, are similar to those of cold but may be accompanied by fever and fatigue, dry cough and shortness of breath.