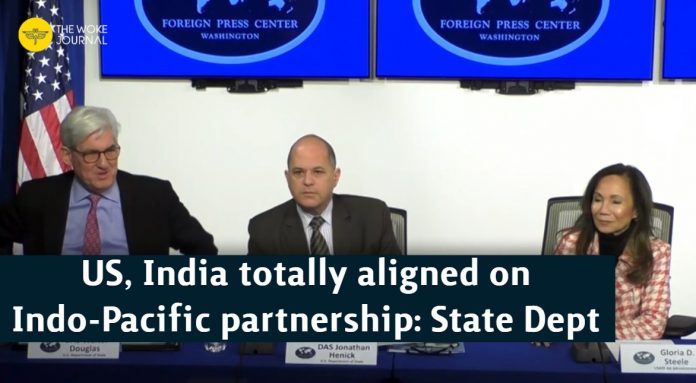 Highlighting India’s special place in the Indo-Pacific, a US State Department official has said that there was “virtually no daylight” between the approaches of the two countries to the strategy for the region and reaffirmed commitment to Washington’s “multi-faceted” and “vital” partnership.

, a Deputy Assistant Secretary for South Asia said on Thursday: “The India-US partnership stands on a shared commitment to upholding the rule of law, freedom of navigation, democratic values, counter-terrorism cooperation, and private sector-led economic growth, so it is not surprising that there is virtually no daylight in our approaches to the Indo-Pacific.”

“Growing our broad and multifaceted strategic partnership with India” was an important facet of the US’s approach to the Indo-Pacific, he said during a digital briefing from Washington.

Asked about Russian Foreign Minister Sergei Lavrov’s recent assertion that the US Indo-Pacific strategy was to exclude China, Walter Douglas, a Deputy Assistant Secretary for East Asian and Pacific Affairs, said: “It excludes no nation, every nation should be part of it.”

He said that although the approach to the Indo-Pacific has been called a strategy, “it is really a vision for how we see the region going forward”.

“It is a restatement and upgrading, and the inclusion of India in this wider vision” because it can bring prosperity to the region, he added.

Earlier this month, Lavrov slammed the US construct of the Indo Pacific.

“Why do you need to call Asia-Pacific as Indo-Pacific? The answer is evident — to exclude China,” he said at the Raisina Dialogue in New Delhi.

“So that area is what is geographical which we consider being in the Pacific,” Douglas said.

Earlier, Henick said that far from excluding any nation, “we encourage and welcome all countries in the region to commit to and act in accordance with the principles” that the Indo-Pacific vision is based on and be a part of it.

These include a commitment to a free and open Indo-Pacific, democratic values, rule of law, and private sector-led development.

The US is not looking for countries to join an alliance or sign binding agreements, he added.

As of January this year, the US doubled the capital of the Development Finance Corporation from 29 million to $60 million.

The officials said this was particularly targeted at providing loan guarantees and risk insurance corporations working on investments in less than profitable areas.

They also highlighted the “Blue Dot Network” — a certification process for “gold standard infrastructure” which has launched in Australia and Japan to promote market-driven, transparent, and financially sustainable projects.

Training human capital, Douglas said was “a huge focus” for the US.

“We’re looking at science technology education environment, health, all these areas where we can have programs and looking to expand those in the region,” he said.

The US officials said that “close to a trillion dollars” in foreign direct investment (FDI) is invested in the region of which the lion’s share goes to Japan, Korea, Singapore, and Australia.”

The US would like to help other countries in the region to draw more FDI.

The US is the largest source of FDI in the Indo-Pacific.

As a ‘major’ defense partner, India has bought more than $16 billion in US defense platforms, the two countries signed a bilateral Communications Compatibility and Security Agreement in 2018 and held a tri-service bilateral exercise, Tiger Triumph, in November 2019.

The US-Australia-India-Japan Quadrilateral Consultations were elevated to the ministerial level in September, which the US calls a “historic first”.AUS officials describe the Indo-Pacific as a “vital” region that is home to all five US non-NATO bilateral defense alliances.