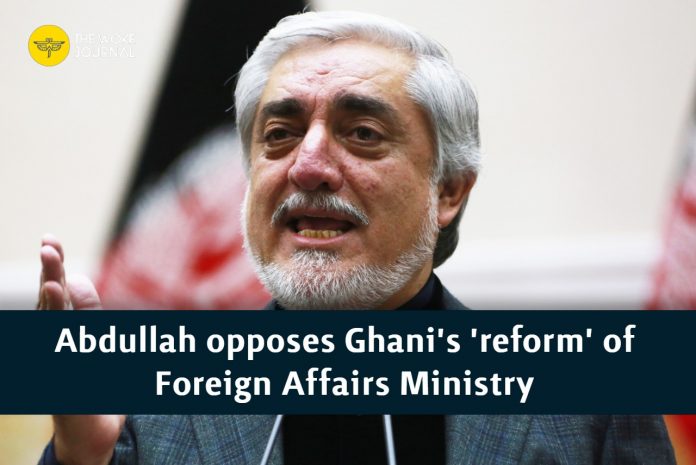 Afghan Chief Executive Abdullah Abdullah has opposed President Ashraf Ghani’s “reforms” to the Ministry of Foreign Affairs and urged to stop any type of “hurried” moves both in the country’s diplomatic offices abroad as well as in Kabul.

Abdullah made the remarks in a decree on Sunday which was in response to the appointment of a new Acting Foreign Minister after the removal of Salahuddin Rabbani from the post, TOLO News said in a report on Monday.

In the decree, Abdullah called the situation “sensitive”, because the country was on the verge of the announcement of the results of the September 28, 2019, presidential election which has been delayed multiple times.

The National Unity Agreement that was brokered by former US Secretary of State John Kerry in 2014 between Ghani and Abdullah, granted the authority also to the latter to make appointments to the Foreign Ministry.

But Ghani has recently been making changes with the Ministry, claiming it his presidential right to make reforms, according to Abdullah’s decree.

While addressing the Council of Ministers’ meeting on Monday, Abdullah reiterated his previous comments and called such attempts of the Presidential Palace as “one-sided decisions”, which, according to him, were not implementable unless the current National Unity Government’s tenure had ended.

Abdullah’s spokesman Mujib Rahman Rahimi said the rift between the Presidential Palace and the Chief Executive Sapidar Palace have increased, and that the situation was not acceptable, according to the TOLO News report.

“Unfortunately, the Chief Executive and his deputies have not been invited to recent cabinet meetings at the Presidential Palace and this is in contravention of the National Unity Government’s agreement,” Rahimi said.

But the Presidential Palace said that based on the law, reform in the Ministry of Foreign Affairs was a must and that it was the President’s authority.