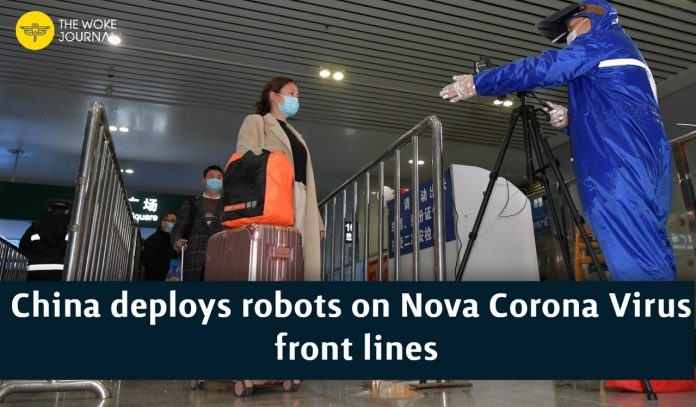 From disinfection and street patrols to food and medicine delivery in quarantine wards, robots were being deployed at the front lines to contain the spread of the novel coronavirus, which has claimed hundreds of lives in China.

More than 30 disinfection robots designed and produced by a Shanghai-based enterprise have entered major hospitals in Wuhan, the epicenter of the outbreak, to combat the epidemic, reports Xinhua news agency.

The white robot has a hydrogen peroxide sprayer on its “head” and nine ultraviolet lamps in its “belly”, and can perform multiple forms of disinfection in environments where humans and machines coexist, Pan Jing, CEO of Shanghai TMiRob, the manufacturer of the robot, said on Friday.

At present, such disinfection robots have been used in isolation wards, ICUs, operating rooms and fever clinics of the city’s major coronavirus hospitals including the Central Hospital of Wuhan to provide around clock disinfection service.

Chinese health authorities on Friday put the total number of confirmed cases in the country at 31,161 from 31 provincial-level regions and the Xinjiang Production and Construction Corps, while 636 people had died of the disease by the end of Thursday.

Robots were joining China’s fight against the epidemic in order to reduce cross-infection risks and improve efficiency.

SIASUN, the country’s major robot manufacturer, on Wednesday, donated 21 robots and 10 electric adjustable beds to local hospitals and other institutions on the front lines of the battle in Shenyang, capital of Liaoning province.

The electric adjustable beds allow infected patients to eat in bed and assist them to sit up and roll over, while the food delivery robots which can recognize human faces and voices are able to provide services for visitors from areas hard hit by the virus, so as to avoid close contact between people.

In Shanghai, several robots patrol the parks and streets to inform the public about epidemic prevention and control.

With the 5G network, the robots can help medical staff carry out tasks involving consultations, disinfection, cleaning, and drug delivery.