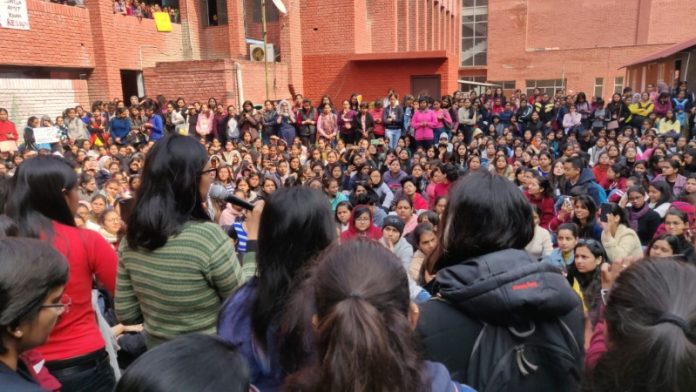 The students of Delhi University’s all-girls Gargi College will continue the ongoing protest as the “students are unhappy with the response of the administration.”

“Gargi College has continued to strike for its fourth consecutive day, to reiterate that the students aren’t happy with the answers given to them by the administration,” the student body said in a statement.

It said the protest would continue and enter its fifth day on Friday.

The girls of Gargi College are protesting against the alleged molestation that occurred on the campus during Day 3 of the annual cultural fest Reverie 2020 on February 6.

The statement of the student body said: “They portrayed their anger through poetry today, using their words as a tool of resistance. They shall be striking till they receive the budget of the event, the final constitution of the ICC (internal complaints committee), and the reports of the Fact-Finding Committee.”

The university’s proctor also held a meeting with the students union on Thursday.

“The Proctor assured us of the college’s support to the students and their cause, and reiterated that the college will work to make the university and colleges safe throughout the year,” the students’ union said.

Meanwhile, the 10 people arrested by the Delhi Police in connection with the incident were sent to judicial custody.