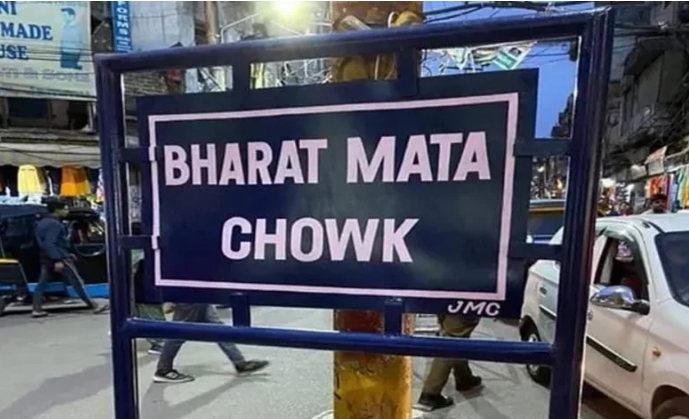 Renaming cities is not a new thing to the ruling Bharatiya Janata Party.

The recent reports coming in suggest that the commercial hub of Jammu the City Square would now be called the “Bharat Mata Chowk.” The corporation passed a resolution to change the name of the city’s commercial hub.

In 2015, Delhi’s Aurangzeb Road was renamed as APJ Abdul Kalam Road while in 2016, the ruling BJP government of the state of Haryana renamed Gurgaon as Gurugram after the Mahabharatha character of Guru Dhronacharya.

Similarly, Mughalsarai Junction was renamed after the RSS ideologue Deen Dayal Upadhyay, Allahabad to Prayagraj and Faizabad as Ayodhya. It is worth noticing that the renaming is specifically of places named by the Muslim rulers in the country.

The BJP led corporation passed a resolution to change the name of City Square to Bharat Mata Chowk.

“I had moved a resolution in the general house some four months ago demanding renaming of the ‘City Chowk’’ to ‘’Bharat Mata Chowk’ on the popular demand of the public,” BJP leader and Jammu Municipal Corporation Deputy Mayor Purnima Sharma said.

She said the resolution was adopted by the corporation.

Sharma also added that it is a historic place that has witnessed many major decisions in the past.

“Every year people are hoisting the tricolour on Republic and Independence days in this chowk. There was a popular demand from the public to rename this chowk as Bharat Mata Chowk,” she said.

The corporation also decided to rename the starting point of the circular road the “Atal Chowk”, after former Prime Minister Atal Bihari Vajpayee.

Reports also suggest that the locals who are already furious with the Indian occupation of Kashmir, are very dissatisfied with this move.

V Gupta, the joint secretary of the Kanak Mandi Market Association said, “They placed the board overnight without consulting the locals,” he said.

“This is the oldest residential and commercial area of the city and known by the name of City Square. It came as a big surprise for us,” he added.

It was on  August 5 last year that the centre scrapped the special status of Jammu and Kashmir, and bifurcated it into two regions Ladakh and Jammu&Kashmir. The region is on curfew ever since.