If there is one name which we might not forget about the mid-20th century art-film revolution, it is Max von Sydow’s. The veteran actor, who is best known for his collaborations with Ingmar Bergman, as well as roles in Star Wars and Hannah and Her Sisters, has died. He was 90.

“It is with a broken heart and with infinite sadness that we have the extreme pain of announcing the departure of Max von Sydow on 8 March 2020,” said his wife, Catherine Brelet a well-known producer, breaking the news to media.

Sydow would always be known as the man who played chess with Death in Bergman’s The Seventh Seal (1957). Other notable roles were that of Jesus Christ in The Greatest Story Ever Told (1965), a doomed priest in William Friedkin’s The Exorcist, and an intellectually snobbish artist in Woody Allen‘s Hannah and Her Sisters (1986).

He would be known to the current generation as the mystical three-eyed raven of Game of Thrones, or for his roles in Extremely Loud & Incredibly Close (2011), or Star Wars: The Force Awakens (2015).

Martin Scorsese – who directed him in 2011’s Shutter Island – remembers Von Sydow “as a consummate actor, with pride in his art and a dedication to his craft ”

Here are a few must-watch films of Sydow:

The knight who plays chess with Death is perhaps the most remembered character of Sydow’s. The movie directed by Bergman is an allegory on the threat of nuclear war. However, Sydow wasn’ satisfied with his acting.  “I have always been bothered by the way I recited my lines. Bergman’s dialogue from that time was very stylized, which would have made it difficult for me to recite my lines in a realistic manner,” he once said.

Another movie created in the Bergman brilliance, Sydow appears as an apolitical musician. But in the latter half of the movie, the character who doesn’t even shoot a chicken transforms to a cold-blooded murderer

Sydow also has done a lot of appreciable roles in his eight-film collaboration with Jan Troell. In this movie,  a farmer couple’s son starves to death because of the bad harvest, the parents decide to emigrate to the U.S. to join a group of farmers who want the same, and embark on their journey.

Directed by William Friedkin The Exorcist is another must-watch movie of Sydow. The role of the young priest, Father Merrin in the movie is one of his favorite performances. “Appearing late in the film, bathed in a white streetlight that makes his entrance fully iconic, Merrin is an avatar of physically frail, spiritually muscular goodness, the latter bound up in a voice so powerful it overwhelms all that bump-in-the-night sound design,” says Adam Neyman. 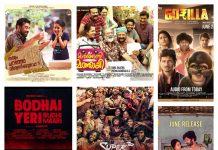