Top Kerala actor Prithviraj and award-winning director Blessy and 56 others are stuck in Jordan after shooting a movie were stopped there following restrictions in the wake of coronavirus crisis and have sought help to return home. 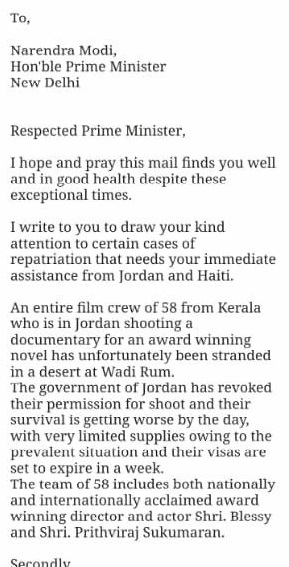 Blessy emailed to the Kerala Film Chamber, seeking help to take up the case with Chief Minister Pinarayi Vijayan. The media came to know about the email on Wednesday.

Prithviraj’s mother Malika Sukumaran, a yesteryear actress, said that she spoke to her son on Monday.

“He said the shooting has been stopped following strict restrictions imposed on account of Covid-19 in Jordan. The shooting was on in a desert. Things are fine with them, except that the shooting is not happening. They were supposed to wind up the Jordan part of the shoot next week and were scheduled to fly out to Algeria as per their original schedule,” said the actor’s mother.

Billed as one of the costliest Malayalam films ‘Aadujeevitham’ is based on the award-winning eponymous Malayalam novel by Benyamin.

It tells the tale of the life of a man ending up in shambles after reaching the Middle East and finds himself tending goats in extreme desert temperatures.