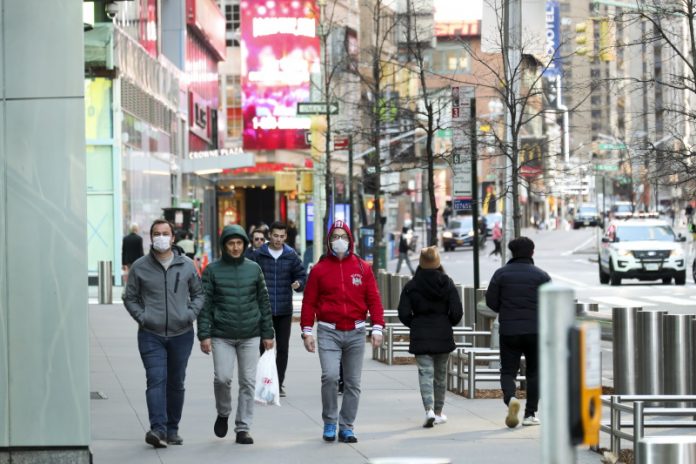 In the week ending April 4, the number of people filing for unemployment benefits slightly decreased by 261,000 to 6,606,000, after setting a second straight record in the previous week, the US Bureau of Labour Statistics reported on Thursday.

“The very large spikes in weekly jobless claims, which were over 6 million for two consecutive months, suggests a much broader set of job closures in the short run,” Michael Hicks, director of the Center for Business and Economic Research at Ball State University in Indiana, told Xinhua news agency email.

“The very rapid adoption of shelter-in-place orders by US Governors is clearly causing a significant reduction in employment across the states implementing it,” Hicks said.

As the pandemic continues to sweep across the country, over 40 states and the District of Columbia have ordered residents to stay at home unless necessary.

Hicks, however, noted that it was also possible that some workers will find work in other sectors (grocery and delivery stores) and for some businesses to reopen after acquiring sufficient personal protective equipment, or separating workers in an assembly line or factory.

The advance seasonally adjusted insured unemployment rate was 5.1 percent for the week ending March 28, an increase of 3.0 percentage points from the previous week’s unrevised rate, according to the report.

Hicks said job losses will propel the US unemployment rate over 15 per cent by the end of April, and “perhaps higher in later months”.

As COVID-19 cases continue to climb, non-essential businesses, such as theatres, museums, gyms and shopping malls, are largely shut down, and restaurants and bars are asked to avoid in-person dining, effectively paralyzing the consumption-driven US economy.

As of Friday morning, 465,750 confirmed cases have been reported across the US, with 16,684 deaths, according to the Center for Systems Science and Engineering at the Johns Hopkins University.