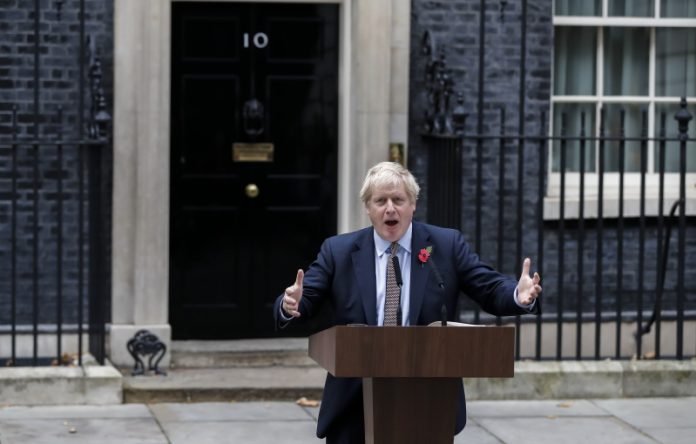 In his first briefing to the nation after recovering from the novel coronavirus, UK Prime Minister Boris Johnson on Monday said that the country was at the moment of maximum risk in the pandemic, and urged people not to lose patience with the ongoing lockdown.

Speaking outside No 10 after he returned to Downing Street on Sunday evening, Johnson said: “We are now beginning to turn the tide” on the disease, the BBC reported.

Johnson thanked his colleagues who stood in while he was away, as well as the public for their “sheer grit and guts”.

The Prime Minister said he understood concerns from business-owners who were impatient to end the lockdown but said: “I refuse to throw away all the effort and sacrifice of the British people,” and risk a second peak of the outbreak which could lead to “economic disaster”.

“I ask you to contain your impatience,” he added.

He said there were “real signs now that we are passing through the peak” – including with fewer hospital admissions and fewer COVID-19 patients in intensive care.

And comparing the fight to someone being attacked, Johnson said: “If this virus were a physical assailant, an unexpected and invisible mugger – which I can tell you from personal experience, it is – then this is the moment when we have begun together to wrestle it to the floor.

“I know there will be many people looking at our apparent success, and beginning to wonder whether now is the time to go easy on those social distancing measures.”

Johnson said the UK has “so far collectively shielded our National Health Service (NHS)” and “flattened the peak” – but he could not yet say when or which restrictions would be lifted to ease lockdown, the BBC reported.

Once the UK is meeting the five tests for easing restrictions – including a consistent fall in the death rate and making sure the NHS can cope – “then that will be the time to move on to the second phase” in the fight against the outbreak, he said.

He added the government would make decisions with “maximum transparency”.

Johnson was diagnosed with the virus on March 27. He was admitted to St Thomas’ Hospital in central London on April 5 and spent a week there, including three nights in intensive care.

The UK leader was discharged on April 12.

He has not been doing any official government work during his convalescence at his country residence, Chequers, although last week he did speak to the UK’s Queen Elizabeth II and US President Donald Trump, as well as meeting senior ministers.