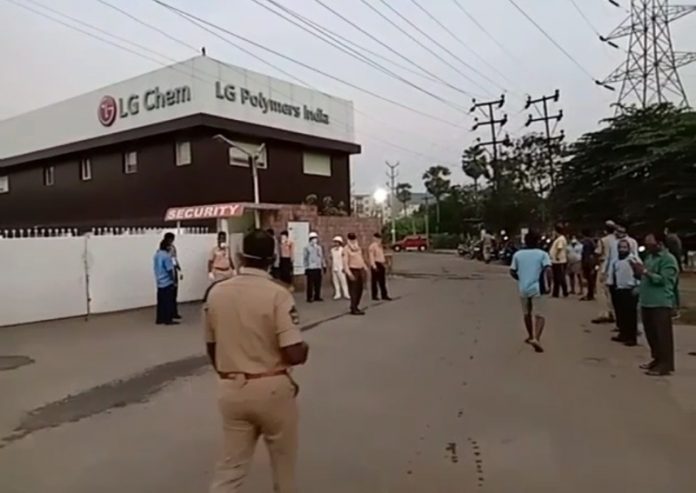 Another gas leakage from LG Polymers in Visakhapatnam late Thursday triggered panic in areas near the plant and forced people to move to safe places.

Fumes were seen billowing out of the chemical plant, where the gas leakage in the early hours of the day claimed 11 lives and affected over 300 others.

People from Gopalpatnam, Simhachalam and Pinagadi areas, which are four km away from the plant, were seen moving to safe places.

The gas smell sent panic in certain areas late Thursday night. Many people rushed out of their houses and were seen heading to safer places by their vehicles.

Local police at few places advised people to move to safe places as a precautionary measure.

Officials, however, said the gas emission was continuing since the major leakage around 3.45 a.m. on Thursday.

Visakhapatnam Police Commissioner R K Meena said there was no need for panic. “Efforts are going on to neutralize the gas leak. There is no danger,” he said.

The police commissioner hoped that the work to plug the emissions will be completed in a couple of hours.

About 12,000 people from RR Venkatapuram and four other villages were evacuated after the leakage early Thursday.

Visakhapatnam District Fire Officer Sandeep Anand said 10 fire engines and two foam fighters were kept ready in the plant. He said some ambulances were also on standby as a precautionary measure.

Meanwhile, a cargo flight carrying a team of experts and PTBC inhibitor, an antidote for styrene, landed in Visakhapatnam late Thursday.

The experts in chemical, biological, radiological and nuclear (CBRN) disaster are likely to begin the operation to plug the emissions after assessing the situation at the plant.