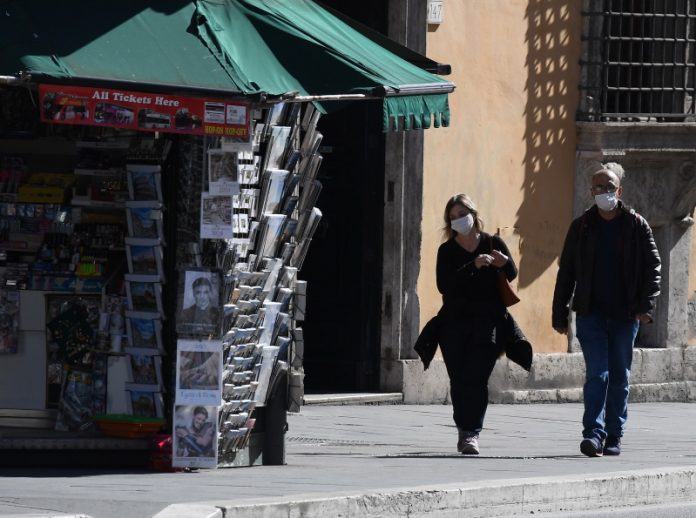 The coronavirus pandemic has claimed 274 more lives in Italy in the past 24 hours, bringing the nationwide toll to 29,958, according to the latest data released by the country’s Civil Protection Department.

There were 1,401 new infections over the past 24 hours, bringing the total number of infections, fatalities and recoveries to 215,858 since the pandemic began in Italy on February 21, Xinhua news agency reported on Thursday.

Of those infected, 1,311 are in intensive care (down by 22 patients compared to Wednesday) and 15,174 are hospitalized with symptoms (down by 595 patients).

During a hearing at the Social Affairs Committee of the Chamber of Deputies (lower house), National Institute of Health (ISS) President Silvio Brusaferro told members of parliament on Thursday that “we will have to live with (the virus) over the next several months (because) realistically it will be very difficult to obtain a vaccine before the beginning of next year.”

“This infection is new,” Brusaferro said. “This virus has new characteristics, and we are acquiring knowledge from the point of view of treatment: a number of clinical trials on various medications are ongoing, but no results have been achieved yet.”

“We know from experience that all infectious diseases, including viral ones, leave an immunological memory behind,” Brusaferro said in reference to antibodies.

“We think that realistically speaking, the majority of the people who developed the infection probably also have an immunological memory of it. What we don’t know is how long this immune response lasts, and how many protective antibodies it generates — if they are enough for us to be able to say that, should this person come in contact with the virus again, they will not get infected again,” he explained.

“We will surely find these answers in the coming weeks as the whole world is busy researching this aspect,” Brusaferro said.

From a diagnostic point of view, the swab is the only way to identify the presence of the virus; 70,000 swab tests are being carried out in Italy on a daily basis, and this number will increase, Brusaferro said.

The impact of the COVID-19 pandemic on the Italian economy is “deep and extensive,” the National Institute of Statistics (ISTAT) said in its monthly economic bulletin published on Thursday.

In March, the measures to contain the pandemic in Italy and in its main trading partners have had negative effects on the country’s foreign trade, with exports to non-EU countries plunging by 13.9 per cent and imports down by 12.4 per cent compared to the previous month, according to ISTAT.

The short-term outlook for manufacturing remains negative, according to ISTAT, after new industrial orders fell by 4.4 per cent on the domestic market and by 4.3 per cent on the foreign market in February compared to the previous month.

Almost two-thirds of Italy’s industrial base — representing 46.8 per cent of turnover and 53.2 per cent of added value in the sector overall — ground to a halt due to the March 10-May 3 lockdown.

Of these, the firms that depend on exports suffered the most, ISTAT said.

The companies that had to shut down makeup 66.6 per cent of all Italian exports and generate 41.3 per cent of their turnover abroad, compared to 26.21 per cent among companies in sectors that were allowed to continue operating, according to ISTAT.

Also on Thursday, Italy’s National Tourism Board (ENIT) said in a statement that travellers have booked 407,000 flights to Italy during the June-August summer tourist season, a 68.5 per cent decline over last year.

Airport arrivals dropped by 63.4 per cent between January 1 and April 26 this year compared to the same period in 2019 due to “antivirus restrictions,” according to ENIT.

Arrivals from China were down 77.3 per cent, and the decline was 71.7 per cent from the United States and 54.5 per cent from Russia, ENIT said.

Tourism represents almost 13 per cent of Italy’s GDP. In the European Union (EU) it accounts for 12 percent of all jobs and generates an income of over 400 billion euros (US $433 billion), ENIT said.

The Italian Federation of Hotel and Tourism Associations (Federalberghi) said that it had observed a “true collapse” in the number of hotel guests in March (minus 92.3 percent among foreigners and minus 85.9 percent among Italians) compared to last year.

In April, said Federalberghi, the market “stopped completely,” with foreign visitors staying in hotels down by 99.1 percent and domestic visitors 96.4 percent.

“The impact of COVID-19 on Italy’s hospitality industry has been devastating,” Federalberghi President Bernabo Bocca said in a statement on Thursday.

Italy mandated a national lockdown on March 10 to contain the pandemic. The lockdown was partly lifted on Monday as the country entered into the so-called “phase two,” which involves the gradual resumption of social, economic and productive activities.