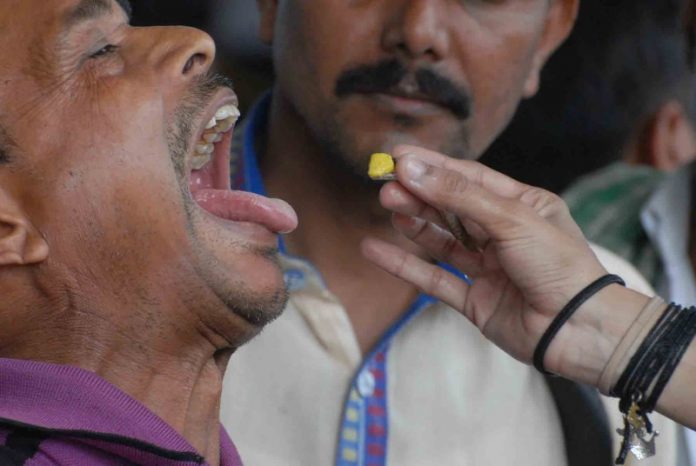 The annual event to distribute fish ‘prasadam’ among asthma patients will not be held this year in view of the Covid-19 pandemic and ongoing lockdown.

The Bathini Goud family of Hyderabad on Sunday announced that the event, held in the first week of June every year, will not be organised this time.

Harinath Goud, the head of the family, said they decided not to distribute fish ‘prasadam’ this year, keeping in view the public scare due to coronavirus and the lockdown restrictions.

This is the first time in many decades that family will not be distributing the fish ‘prasadam’.

The Telangana government has already extended the lockdown till May 29. “Even if the lockdown is lifted, it will not be possible to follow the physical distancing norm and hence we decided not to organise the event this year,” Harinath Goud said.

He cautioned people against some fake messages being circulated in the name of Bathini family about fish ‘prasadam’ distribution.

Every year, the family distributes fish ‘prasadam’ to asthma patients on Mrigasira Karthi, which heralds the onset of monsoon and normally falls on June 7-8.

People suffering from asthma and other respiratory problems reach here every year from various states to received fish ‘prasadam’ from the family which claims to be distributing it free of cost for 175 years.

Last week, an NGO working for child rights had urged the Telangana government not to allow the annual event in view of the coronavirus pandemic.

Balala Hakkula Sangham had said the state government should not facilitate the event.

Reiterating that the ‘fish medicine’ is unscientific, its BHS Honorary President Achyuta Rao said the state government should not facilitate the Bathini brothers in administering it.

Thousands of asthma patients from various parts of the country gather in Hyderabad to receive fish ‘prasadam’ (offering), as the medicine began to be called by Bathini Goud family a decade ago after rationalists challenged its efficacy.

Despite the controversies which hit its popularity in recent years, people continue to throng the venue in the hope of finding some relief to their nagging respiratory problems. However, the numbers have dwindled over the years.

The asthmatics gulp down a live ‘murrel’ fish with a yellow herbal paste in its mouth, which is believed to provide the much-needed relief if taken for three consecutive years. For vegetarians, the family gives the medicine with jaggery.

The Goud family claims that the secret formula for the herbal medicine was given to their ancestors in 1845 by a saint after taking an oath from him that it would be administered free of cost.

Every year, various government departments make elaborate arrangements for the annual event held in Exhibition Grounds in the heart of the city.

The family had been distributing the fish medicine at their ancestral house in Doodhbowli till 1997 when the communal riots in the old city had forced it to shift the venue to Nizam College grounds. Subsequently, the government persuaded them to permanently shift the venue to Exhibition Grounds.