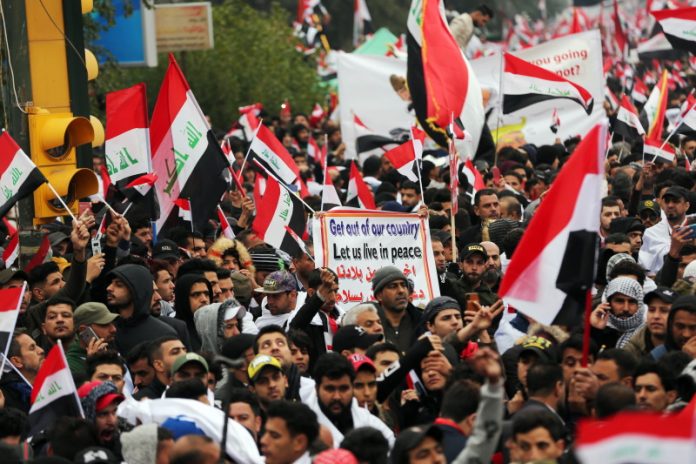 Iraqi protesters returned to the streets of Baghdad and staged anti-government rallies, despite the swearing-in of new Prime Minister Mustafa al-Kazemi and his cabinet which ended five months of political turmoil.

On Sunday, hundreds of protesters gathered in Baghdad’s Tahrir Square, the epicentre of the anti-government protests that first erupted in October 2019 and were interrupted over the past few months amid coronavirus restrictions, reports Efe news.

Some of the protesters headed to the Al-Jumhuriya Bridge, which links central Baghdad with the high-security Green Zone, where the foreign embassies and government headquarters are.

Violent clashes have taken place on the bridge on several previous occasions.

Iraqi security forces used stun grenades and tear gas to prevent protesters from crossing the bridge, although demonstrators set fire to tires on it.

“Dozens of protesters, mostly youngsters, headed from Tahrir Square to Al-Jumhuriya Bridge and seized control of a point on the bridge, which is closed with concrete blocks,” an Interior Ministry source told Efe news on Sunday.

For months, Iraqi protesters have been demanding more economic opportunities, better public services, an end to the political sectarian system and to corruption, as well as calling for snap elections.

Al-Kazemi on Saturday called for the release of protesters who have been arrested but have not been charged with crimes.

He also urged the security forces to protect the protesters during the rallies given that more than 500 Iraqis have been killed since the beginning of the protests in October, according to Iraq’s High Commission for Human Rights.

The new Prime Minister was approved by Parliament on May 7 after two previous failed attempts by Mohamed Tawfiq Allawi and Adnan al Zurfi to form a government.

Al-Kazemi had replaced Adel Abdul-Mahdi who stepped down last November in the wake of the rallies.