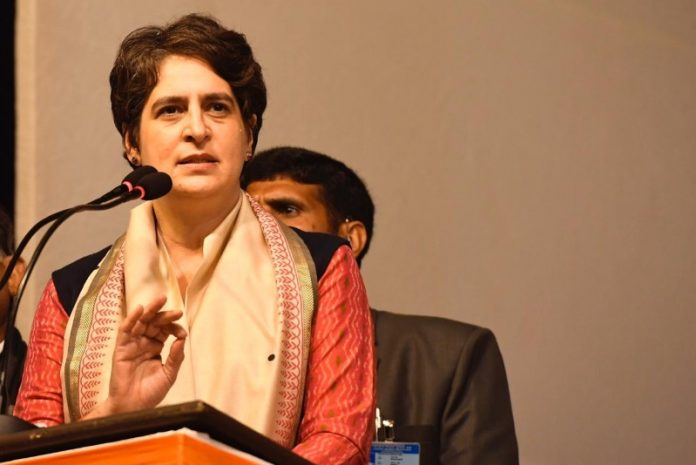 After giving a list of buses to be plied for the migrants labourers Congress General Secretary Priyanka Gandhi shot a letter to the Additional Chief Secretary Avneesh Kumar Awasthi and had alleged that the whole episode emanating from the Chief Minister’s office is nothing but politics and lacks the intention of helping the poor migrants who are stranded at UP border.

The letter written early Tuesday at 2.10 a.m. alleged that a letter was received from the Additional Chief Secretary Avneesh Awasthi’s office at 11.40 p.m. on late Monday night said that all the buses should report in Lucknow by 10 a.m. on Tuesday is nothing but politics.

The letter written by Sandeep Singh personal aide of Priyanka Gandhi said that “when people are stranded at UP border in Ghaziabad and Noida or various state entry points to register themselves it is waste of resources to ask the buses to be sent to Lucknow. Sorry to say there is no intention to help the brothers and sisters who are walking on foot. The government is indulging in pure politics. As the Chief Minister is saying in TV program that we are asking list from three days while your communication was received on Monday at 4.01 p.m.”

Earlier on Monday after a political row ensued over Congress leader Priyanka Gandhi extending an offer to run 1,000 buses for migrants to Uttar Pradesh, her personal secretary has given details of the buses and its drivers to the UP government.

UP government has asked the list of buses from the Congress. In a letter, Gandhi’s personal secretary Sandeep Singh said, “All details of the 1,000 buses are attached with this e-mail. Out of them, few drivers will be reverified and those details will also be mailed to you in a few hours. I hope you will give permission for those buses to ply as soon as possible.”

Making a political point, Singh added that many labourers who are “the backbone of the country” are forced to walk hungry in the summer heat. Singh, however, asserted that the move by Congress is an effort to play a “positive role”.

Earlier, the UP Congress claimed to have submitted the list of 1,000 buses to the Yogi Adityanath government following which the state government sought details of the buses and drivers.

Earlier in the day, Chief Minister Yogi Adityanath had slammed the Congress for not submitting the list of buses and playing ‘petty politics’ on the migrant workers’ issue.