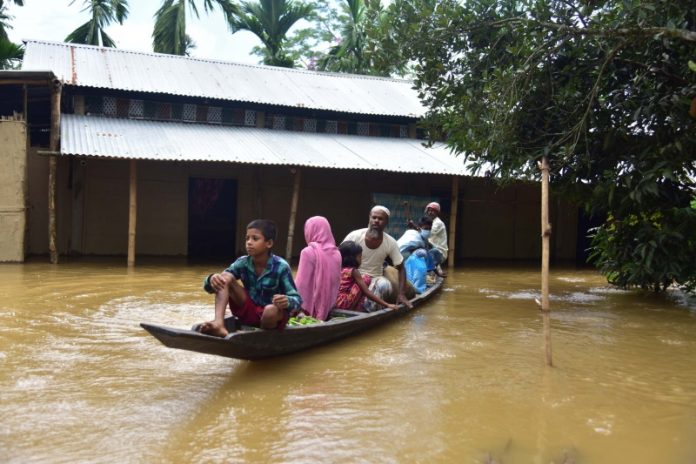 Amidst the COVID-19 surge, around three lakh people have been affected as the pre-monsoon flood situation deteriorated in eleven districts of Assam, officials said on Thursday.

Officials of the Assam State Disaster Management Authority (ASDMA) said that roughly 20,000 people are taking shelter at relief camps at Nalbari, Goalpara and Tinsukia districts while other affected people have made their own makeshift arrangements at higher places.

The ASDMA officials said that heavy and incessant rain since Tuesday has led to the flooding of 321 villages in 11 of Assam’s 33 districts while a man drowned at Rongjuli village in western Assam’s Goalpara district on Wednesday.

Of the 11 districts, Goalpara, Nalbari and Tinsukia are the worst affected. According to the officials, most rivers are in spate but the mighty Brahmaputra, Jia Bharali and Puthimari are flowing above the danger mark in Jorhat, Sonitpur and Kamrup districts respectively.

The officials said that the floods have so far damaged crops in 2,678 hectares and affected 44,331 domestic animals and 9,350 poultry.

Assam Chief Minister Sarbananda Sonowal held a meeting with senior officials of the concerned departments in Guwahati on Wednesday and Thursday and reviewed the flood situation in the state. He asked the officials to ensure the all Covid-19 protocols including social distancing, hand washing, wearing of masks are continued at the relief camps in a bid to prevent the spread of coronavirus during the flood season.

“The Chief Minister has also directed all the Deputy Commissioners to keep ready soap, water for hand washing and masks for inmates and to sanitize the flood relief camps. He also asked the district administrations to ensure that no irregularities take place while distributing relief to the flood affected people,” an official in the Chief Minister’s secretariat said.

The incessant rain accompanied by a nor’wester (also known as “Kalbaisakhi”) and water-logging also affected life in Arunachal Pradesh, Tripura and Meghalaya. Officials in Itanagar said that a woman and her two children were buried alive in a landslide at Arzoo village in Dibang Valley district on Monday night. Incessant rain for the last couple of days triggered the landslides and floods that left trails of large scale devastation in the entire state.

The India Meteorological Department (IMD) had earlier on Tuesday also warned of extremely heavy rainfall in Assam, Meghalaya and Arunachal Pradesh. Several parts of Assam and neighbouring states have been receiving heavy rain since super cyclone Amphan weakened last week. IMD director Dilip Saha told IANS on Thursday that pre-monsoon rains occurred in most parts of the northeastern region as the normal monsoon is expected to enter the region in the first or second week of June.