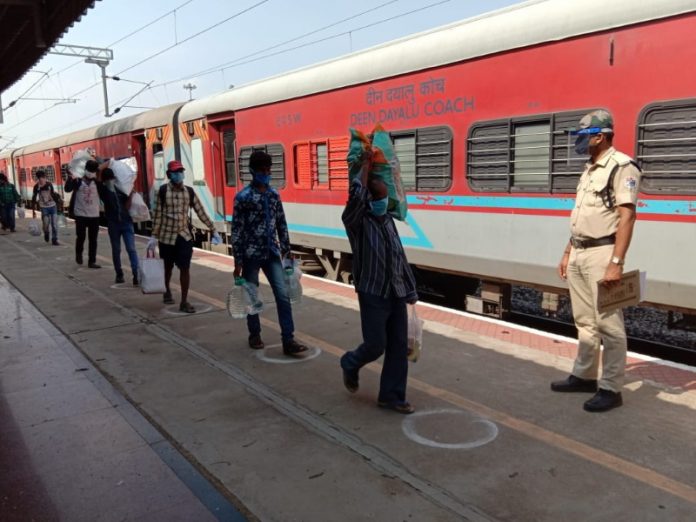 Train services partially resumed on Monday as several trains left for their destination according to timetable after an unprecedented break in train movement since March 25. According to ministry officials, more than 1.45 lakh passengers are set to travel on Monday.

According to the Railway Ministry, the first train to depart was Mahanagri Express from the Chatrapati Maharaj Shivaji Terminus at 12.10 a.m. for Varanasi.

The Railways has announced to partially resume the services of 200 trains from June 1.

On Monday morning, Karnawati Express between Ahmedabad and Mumbai Central departed from Ahmedabad at 4.55 a.m.; followed by Bengaluru-Hubli Jan Shatabdi Express from Bengaluru station at 6 a.m. with 82 passengers. According to railways, 160 passengers have booked the ticket for the train, and there will be further boarding at Yesvantpur and Tumukuru stations.

The official said that the Bengaluru-Hubli Jan Shatabdi Express was flagged off by contract cleaning staff S.Indra and pointman Vithal Patil.

Similarly, the Gomti Express departed from Lucknow station at 6 a.m.

The railways has asked the passengers to arrive at the railway stations one and half hours before the departure for thermal screening. The official also said that the protocol of social distancing, sanitisation of hands, wearing of face masks, thermal screening and other laid down protocols were being ensured.

Around 26 lakh passengers have booked for Advance Reservation Period (ARP) from June 1 to 30.

The railways have been running the Shramik Special trains since May 1 and it has to date operated 4,000 trains and transported 56 lakh passengers across the country.

The Railways has also been running the 15 pairs of the Special air-conditioned trains since May 12.

The passenger, mail and express train services were suspended for some 66 days in the wake of the nationwide lockdown to combat the spread of novel coronavirus (Covid-19). During the lockdown, only the freight and special trains were run to ensure the supply of the essential items across the country.